Canadian investigators believe the unsafe practice of departing from remote airports with a degree of icing contamination on critical surfaces had become normalised, before a fatal accident involving a West Wind ATR 42-300 at Fond-du-Lac.

This normalisation resulted partly from the inadequacy of de-icing equipment or services at these remote locations, says Transportation Safety Board of Canada, and was reinforced by “past success” in adapting to the situation.

Investigators probing the accident found that “no effective risk controls” had been in place to mitigate the hazard of ground icing when West Wind started services from Fond-du-Lac in 2014.

Some ice had already accumulated on the ATR during its approach to the airport on 13 December 2017, but the crew did not experience any handling problems before the landing. 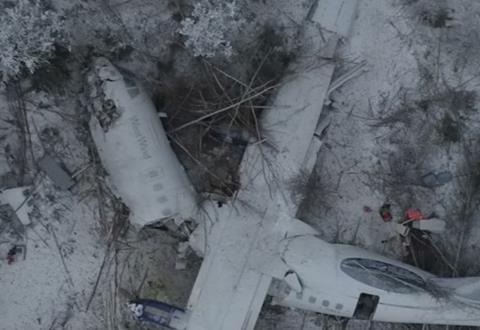 Prior to its subsequent departure, additional ice had accumulated on the ATR’s critical surfaces.

But the first officer’s ice inspection consisted only of walking around the aircraft – which was parked on a dimly-lit apron – without a torch, and looking at the left wing from the top of the left-hand aft entry door.

“As a result, the full extent of the residual ice and ongoing accretion was unknown to the flightcrew,” says the inquiry.

“Although the [pilots] were aware of icing on the aircraft’s critical surfaces, they decided that the occurrence departure could be accomplished safely.”

The inquiry says “continuation bias” influenced this decision because cues supporting the plan were perceived as “more compelling” than later cues suggesting otherwise.

Ice accumulation increased the aircraft’s drag by 58%, it states, while lift was reduced by 25% during take-off.

The ATR nevertheless managed to climb initially, but began to roll to the left after becoming airborne as a result of asymmetric lift distribution arising from uneven contamination.

As the aircraft rolled, says the inquiry, the captain reacted as if the aircraft was uncontaminated. But the aircraft responded with diminished roll damping, resulting in “unexpected” handling and dynamic response.

Analysis determined that the ailerons had sufficient authority to counteract the asymmetric lift that triggered the roll. But the aircraft’s dynamic response resulted in the roll evolving into an oscillation of increasing magnitude, and the crew lost control of the roll axis.

The ATR lost altitude and struck the ground with a left bank of 30° and level pitch.

Its landing-gear housing did not deform and the unattenuated acceleration caused the wing support structure to fail. As the wing collapsed into the cabin, above the main landing-gear, it seriously injured passengers seated in the left mid-cabin, one of them fatally.