One hazy aspect of last year’s fatal Iranian missile attack on a Boeing 737-800 centres on the circumstances through which the aircraft was singled out when other flights were also operating from Tehran’s Imam Khomeini airport.

The Iranian Civil Aviation Organisation, which investigated the 8 January attack on Ukraine International Airlines flight PS752, attributed the event to a misaligned air defence unit – which falsely indicated the aircraft’s direction – and a failure by the unit’s operator to obtain clear authorisation to fire.

This unit had been tactically relocated at 04:54 on day of the incident, the inquiry says, and this change introduced the misalignment error.

After the unit’s relocation, four flights took off from Imam Khomeini airport between 05:00 and 05:39. These comprised two Qatar Airways services, to Doha and Hong Kong, and two flights to Istanbul by Turkish Airlines and AtlasGlobal.

No indication has been given as to whether the air defence unit detected these flights, correctly or otherwise.

The UIA 737, bound for Kiev, was the next flight to leave. It had been scheduled to depart at 05:15 – the same time as two of the four previous flights – and while passengers started boarding at 04:45, the departure was substantially delayed.

“Based on the flight co-ordinator’s report form, the reason given for its delay was the aircraft being overweight and the decision not to load passengers’ luggage in order to reduce the aircraft weight,” says the inquiry.

Boeing lists the design maximum take-off weight of the 737-800 at 79t, but carriers can agree to restrict an aircraft’s operation to a lower approved MTOW in order to benefit from reduced air navigation charges and other cost savings.

The inquiry puts the operating MTOW of the UIA aircraft at 72.5t. To keep within this weight, nearly 2.1t of baggage was not loaded, while some passengers’ hand luggage was placed in the hold because of a large volume of baggage in the cabin.

Although the crew made contact with the tower, to request initial clearance, at 05:13 the paperwork and closing of the aircraft’s doors were not completed until 05:49, after which the tower began co-ordinating the flight’s departure with Mehrabad approach, Tehran area control centre, and the civil-military operational co-ordination centre.

Once the co-ordination was finalised, the aircraft was cleared for pushback at 05:55.

UIA insists that no warnings or limitations on the use of Iranian airspace were sent to the 737 crew. Owing to the cockpit-voice recorder’s not being activated until engine-start, there is no information on whether the crew discussed any concerns or precautions relating to the airspace beforehand, but no such conversation was recorded afterwards.

No other airline with flights departing Imam Khomeini airport on the day imposed restrictions on their services based on risk assessment, the inquiry says. 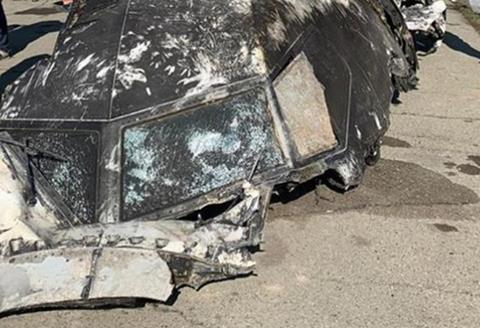 Investigators state that the relocated air defence unit switched from being on standby to being “set at operation mode” at 06:07.

The specific reason for the change at this particular time – whether it was pre-planned, the result of heightened alert, or other circumstances – has not been clarified, nor has the inquiry detailed any military procedures involved in the transition between the two states.

No information has been given as to whether the air defence unit was aware of aircraft traffic schedules in general, and that of the delayed 737 in particular.

The inquiry says the PS752 flightplan had been sent to the military sector, and the civil-military co-ordination centre had been receiving civil surveillance radar information. It points out that the 737’s flightpath to the north would not have taken it near restricted airspace in the west of Iran near the Iraqi border.

About 4min after the air defence unit’s mode change, the 737 finally began its take-off roll from runway 29R at 06:11. The first of two surface-to-air missiles was launched at the aircraft shortly before 06:15.

Investigators do not appear to have explored within their final analysis the effect of the aircraft’s delay on the subsequent events or whether other aircraft, scheduled to depart after the 737, might potentially have been vulnerable had their services not been cancelled.

These flights included services to Najaf, which had been halted by suspension of traffic exchange with Iraq, and a Turkish flight to Istanbul Sabiha Gokcen which was cancelled by the unrelated closure of the destination airport.