Sukhoi Superjet 100s will not be permitted to operate in Europe if power-assist systems for their exits have been de-activated, following concerns that evacuation could be hampered by flight attendants’ inability to open doors quickly.

The European Union Aviation Safety Agency has chosen not to adopt a series of Russian airworthiness directives, issued over the past year, centred on inspection of door arms and emergency power-assist systems.

One of these directives, from March 2020, required de-activation of the power-assist system on certain aircraft and a follow-up directive in December 2020 introduced amendments to manual operating procedures on these affected doors. 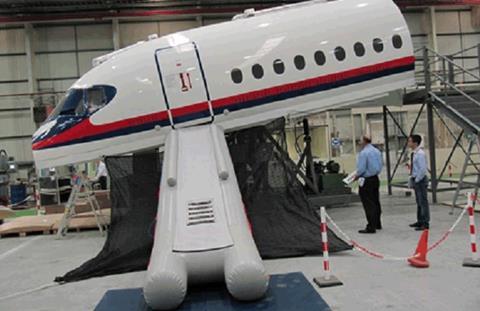 But EASA says it is “not convinced” that cabin crew would always be able to operate the door manually “at the right speed needed to ensure proper opening” and correct deployment of the slides. It says insufficient damping capability of the power-assist system can result in the slide “twisting” under the fuselage or being left in an inoperable position.

It adds that the effort to update EASA-approved documentation “would not have been proportionate” given the limited number of aircraft registered in countries within its regulatory sphere.

EASA decided that high-frequency repetitive inspections of the power-assist system dampers is more effective for reducing risk, and their replacement with an improved – and already-approved – design is the “best solution”. EASA has newly-issued its own directive to this effect.