Europe’s air transport safety regulator is ruling out a certification mandate to fit aircraft with systems capable of detecting and alerting pilots to frozen contaminants on critical aerodynamic surfaces.

Such a requirement has been rejected by the European Union Aviation Safety Agency in a proposed revision to large aircraft certification aimed at lessening loss-of-control risks – particularly during take-off – from unnoticed ice or the effects of de-icing fluid.

Mandating an on-board system on new aircraft designs or in-service types “would not guarantee a significant safety benefit”, argues EASA.

It states that ice-detection systems have previously been developed – such as that for the upper wing of Boeing MD-80s – but they are able to pick up “only a known contamination scenario on a specific part of an aircraft” in their current form.

The MD-80 system was intended to prevent accumulated ice, arising from cold-soak fuel frost, shedding into the type’s aft-mounted engines.

“It cannot be certain today that the system can be adapted with the same reliability to other aircraft types without affecting efficiency of operations,” says EASA, highlighting the problem of false alerts. 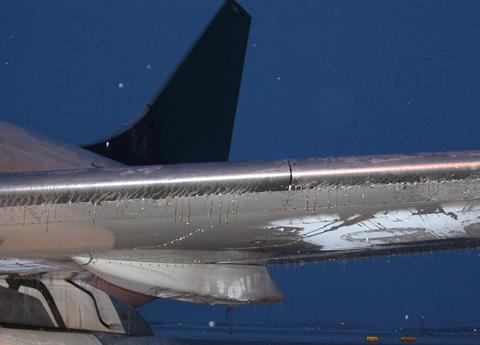 Wing icing can cause loss-of-control problems during take-off

EASA also points out that, in some cases, crews have attempted take-off even while being aware of contamination.

“Continuation of safety promotion and standardisation actions is therefore the preferred option,” it says in the amendment proposal.

But it adds that technology for on-board systems should continue to be monitored for possible future applications.

The broader proposal would require applicants for future aircraft certification to set out operating procedures and limitations in the aircraft flight manual if the aircraft is to be approved for take-off with defined contamination levels on critical surfaces.

EASA’s proposed changes will also cover criteria for testing and selection of de-icing or anti-icing fluids for a large aircraft design.