Europe’s aviation regulator is initiating a research effort intended to address the risk of overruns caused by deficiencies in runway micro-texture, and explore the use of laser-scanning to establish suitable thresholds for runway surfaces.

Analysis of a number of overrun events showed that aircraft brakes and anti-skid functions were normal, the macro-texture depths of the runway was within the correct range, and there was no significant rubber accumulation.

“In these occurrences the runways were wet and not flooded,” says the European Union Aviation Safety Agency. “It was believed that the difference in the braking performance was due to the deficiencies in the surface’s micro-texture.”

But in some of the overrun events the devices recorded a friction level above minimum while the aircraft experienced substantially lower levels during the landing.

Micro-texture is the fine-scale roughness from the presence of small aggregate particles, and complement the macro-texture to ensure good braking action in the wet.

Smooth micro-texture, says EASA, can cause low braking friction even when the runway is damp.

“There are neither minimum requirements nor an established method for determining and monitoring micro-texture characteristics,” it states. 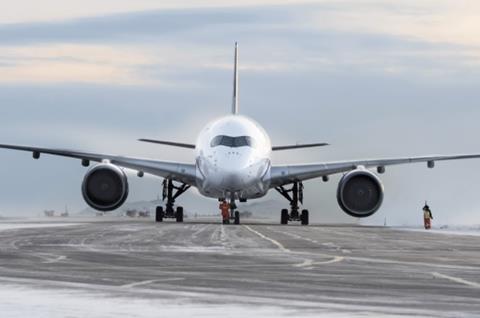 As part of the broader Horizon Europe programme the authority is inviting tenders to conduct research on the issue, with a view to taking rulemaking action on establishing threshold values for micro-textures below which a runway would be considered ‘slippery wet’.

It would also look at criteria to develop trend monitoring and review certification specifications for runway surfaces.

Although laser-scanning techniques to analyse road surfaces have been explored, and produced “some encouraging results”, EASA says these have not translated into common standards.

Further investigation is needed, it says, to correlate laser-scanning results with wheel braking on wet runways.

“This may result in minimum values of micro-texture characteristics which could be used to characterise a runway as ‘slippery wet’ and initiate maintenance actions,” adds EASA.

EASA says that many overrun events examined “could have been avoided” if the braking peformance had matched that specified in certification standards, or if the crew had been informed in a timely manner that the runway condition was slippery wet.