While checks and comparisons on air-data probes are part of modern aircraft logic – and can result in data rejection – the European Union Aviation Safety Agency says that recent safety incidents have highlighted the risks of simultaneous adverse effects on air-data sources.

Common-mode influences could consistently affect two or more air-data sources, says EASA, but remain undetected by system cross-checks. This could result in incorrect information – on airspeed, angle-of-attack, or other crucial parameters – being fed to flight-control systems.

While significant efforts have been made to characterise icing and raise qualification standards, the systems remain vulnerable to such events as maintenance errors, bird strikes, and volcanic ash emission.

“The project aims to further develop the understanding of such failure mechanisms, and to develop solutions,” says EASA, adding that it will improve the authority’s certification standards and support evaluation of new aircraft design. 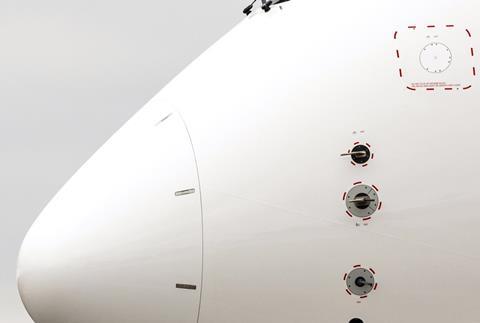 EASA is looking at enhanced monitoring of crucial air-data systems

“Flight-control laws are becoming increasingly complex,” it says. “Having dissimilar control laws to compare and address the integrity aspect and detect errors is difficult, and sometimes impossible, to achieve.”

Its proposed research project will focus on normal-mode laws.

EASA says modern flight-control law reliance is primarily based on “rigorous” assurance processes to establish confidence in the disciplined development of such laws, and limitation of the likelihood of errors that could affect aircraft safety.

“However, development assurance can only minimise the system development risk,” it says. “An additional difficulty is that errors may remain latent until they occur.”

The research, for which EASA has published a call for tender, will investigate introduction of control-law monitors to detect errors.

“Potential control law errors should be identified, and their criticality needs to be determined,” it says. “Multiple monitors to detect such errors should be proposed without taking into account the necessary effort entailed.”