Safety aspects of two potential scenarios for single-pilot operations in commercial aircraft are to be assessed under a new research project initiated by the European Union Aviation Safety Agency.

The project is intended to provide a “qualitative and quantitative” assessment of the main safety hazards as well as examine whether compensation measures proposed enable these single-pilot concepts to be implemented without reducing the safety levels associated with current two-pilot operations.

EASA says it has been approached by airframers “interested in exploring the possibility” of reducing the number of pilots in large aircraft operations in the medium to long term.

Such operations could be implemented from 2025.

The more radical concept – with a potential introduction from 2030 – involves end-to-end single-pilot operations, or SiPOs.

EASA points out that its air operations regulations regarding flightcrew composition already lay out conditions which might permit single-pilot operations.

“In the future, it is expected that these conditions and limitations will need to evolve in order to extend single-pilot operations to large [aircraft],” the authority says, “provided that compensation means…are in place in order to provide for an overall level of safety equivalent to today’s two-pilot operations.” 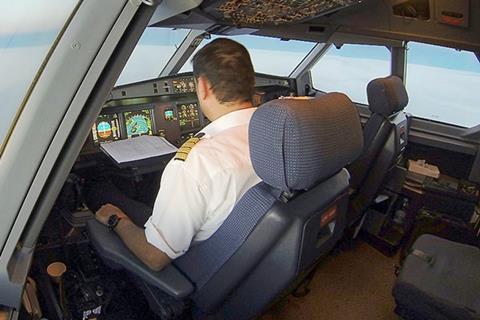 While aircraft manufacturers have separately been looking into the feasibility of reduce-crew concepts, the proposal requires a “robust assessment” of the safety impact “at all levels”, says EASA.

It is initiating the independent research project to support the safety case as well as the development of amendments to flight regulations. The project’s main aim is to draw up a reference risk-assessment framework for the potential changes, focusing on analysis of human factors issues in normal and abnormal circumstances – such as sleep inertia, fatigue management or pilot incapacitation.

“The scope of the project encompasses the generic risk assessment of the main changes induced by [eMCOs and SiPOs] while considering a series of changes to aircraft cockpit configuration identified for large [commercial air transport] aircraft and including new flight management applications,” says EASA.

EASA says eMCOs will be the primary focus – owing to the shorter timeframe to introduction – but will include a preliminary hazard analysis for SiPOs, with results of the eMCOs risk assessment potentially being reused to support SiPOs analysis.

It says the main safety concerns in regard to eMCOs centre on ensuring adequate monitoring of the single pilot’s performance and providing suitable situational awareness while maintaining a manageable workload level – including cases of failure situations.

Cockpit design should be “appropriately tolerant of errors”, it points out, particularly given the absence of normal cross-checking capacity from the second pilot.

EASA also underlines the need for requirements on medical fitness, to reduce the probability of pilot incapacitation, capability to detect when the pilot is no longer fit to fly, and risk mitigation to cope not only with incapacitation but such matters as sleep inertia and physiological breaks.

Fatigue risk, it says, must be maintained at a level comparable to two-pilot operations and cockpit crew will need to be properly trained.

As part of the project researchers will be asked to identify not just areas in which eMCOs might adversely affect safety but also those in which there might be a safety benefit.

EASA expects the research organisers to carry out surveys and technical workshops with commercial pilots from various airlines, covering different levels of experience, and the completion of a series of flight-simulation exercises. The authority aims to sign a contract for the research around June next year.