Helicopter safety researchers are to undertake formal analysis of the hazardous vortex ring phenomenon and the effectiveness of an alternative recovery and escape technique.

The vortex ring state is an aerodynamic condition which typically emerges in vertical descent, when relative upward air velocity equals the downward induced main rotor flow – resulting in the downward flow being recirculated into the rotor.

It generates a turbulent flow – with a toroidal shape – across a large region of the rotor disc.

This toroidal turbulence is known as a vortex ring and it causes a loss of rotor efficiency despite the continued delivery of engine power.

“In this [condition] most of the power developed by the engine is wasted in circulating the air around the rotor,” says the European Union Aviation Safety Agency, which is intending to award a two-year contract for the research. 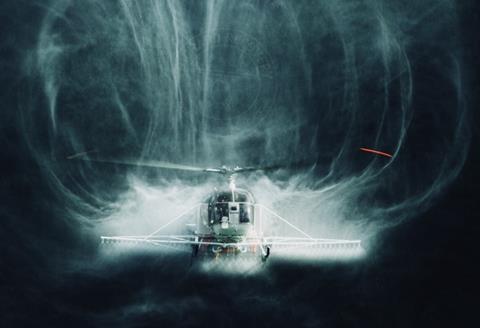 Helicopters affected by the vortex ring state experience vibration, uncommanded oscillation in the pitch and roll axes, limited flight control, and – most critically – high descent rates of up to 6,000ft/min.

EASA says that, despite previous studies on the condition, “very little” is known about the precise physical and dynamic criteria for any specific helicopter type which might lead to vortex ring creation.

The research programme will improve understanding of the phenomenon on different helicopters and the simulation and flight-test methods for predicting its onset.

But EASA also aims to assess the effectiveness of alternative pilot recovery manoeuvres.

It says a traditional recovery to exit an incipient or full vortex ring involves increasing airspeed, through forward longitudinal cyclic control, and lowering the collective.

“The drawback of this recovery manoeuvre is the further loss of altitude produced by the pitch-down attitude attained to increase the forward speed,” says EASA.

“If the vortex ring is developed at low altitude…there may be not enough altitude to complete the recovery and hence to avoid the ground impact.”

A relatively new alternative recovery sequence – using the ‘Vuichard technique’, named after Claude Vuichard – involves increasing the collective to maximum power while maintaining heading through pedal input and applying opposite lateral cyclic to bank out of the vortex.

This technique, says EASA, is claimed to be effective at limiting altitude loss compared with the conventional escape method.

“There is the need to verify its effectiveness on different helicopter models having different dimensions and rotor types and in different flight conditions at which the [vortex ring] might be developed,” it adds.

EASA intends to use the results of the research to support assessment of the need for possible changes to certification specifications and pilot-training regulations.