EasyJet A321neo flew out-of-balance after passengers seated for A320

UK investigators have revealed that an EasyJet Airbus A321neo operated from Bristol to Edinburgh while outside of its centre-of-gravity envelope, after the aircraft was brought in to replace the smaller A320 originally scheduled for the service.

The condition was not detected until the aircraft was boarding at Edinburgh for the return service to Bristol, when the cabin manager remarked to the captain that passengers were not seated according to the loading form.

After the captain requested a manual zone count, the crew realised the passenger distribution was based on seating zones on the A320 rather than the A321neo. The captain ordered re-allocation of the passengers’ seats to correct the problem before departure.

The UK Air Accidents Investigation Branch says the crew had flown the prior Bristol-Edinburgh sector believing the centre-of-gravity was towards the forward limit – but still permissible – after entering load figures into the electronic flightbag.

But an EasyJet investigation found that, unknown to the crew, the aircraft had been outside of the operating envelope. 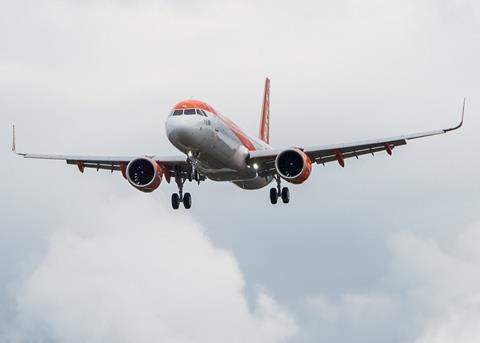 Its analysis concluded that, after the aircraft type was swapped, the change was not identified by the departure control system responsible for generating the information recorded on the load form.

Although the turnaround co-ordinator prepared the load form with the correct aircraft and registration, he unwittingly completed the form with invalid data from the departure control system.

As a result the flight closed with a passenger distribution reflecting an A320 seating configuration, not that of an A321neo.

The Air Accidents Investigation Branch inquiry notes that mitigation procedures introduced in response to the Covid-19 pandemic played a role in the 3 January incident.

It says the turnaround co-ordinator would normally hand the load form directly to the crew, providing an opportunity for the pilots to query any last-minute changes. But pandemic procedures minimised interaction with the pilots, and the load form was instead delivered via the cabin manager.

“As the [co-ordinator] was not on the flightdeck, the crew were more likely to accept changes presented to them without discussion,” the inquiry states, pointing out that the error was detected at Edinburgh after the cabin manager checked the load form.

Investigators also found that the Covid-19 environment had resulted in a high number of changes to EasyJet’s schedule, and a validation process for updating the departure control system was taking longer to run – with the result that some changes were not automatically detected.

“The various elements of the IT system architecture do not ‘talk’ directly to each other but operate through a variety of interfaces,” the inquiry states, making errors and inaccuracies “more likely”.

Although manual updates could be made after a swap of aircraft type, this process had not accounted for a scenario involving an update after boarding had already started.

“This serious incident was caused by a combination of operating factors in a complex system interacting in a manner which had neither been designed nor predicted,” the inquiry says.

EasyJet took several steps to improve safety after the incident, introducing procedures to conduct manual checks between IT systems when aircraft types are swapped, and for specific co-ordination between the chief pilot and duty pilot regarding type changes.

It is exploring the options for updating the IT system to cope better with communicating operational changes, and the carrier also requires a manual bay count to be completed before every departure to ensure that weight and balance calculations are accurate.