French investigators have disclosed that an EasyJet Airbus A320 captain intervened to urge a United Airlines Boeing 787-10 crew to execute a go-around, after he saw the 787 had shifted its approach to the wrong runway at Paris Charles de Gaulle.

The EasyJet aircraft had been cleared to line up on runway 09R – for departure from the D5 intersection, about 1,000m from the threshold – and had moved 10m onto the runway when its captain saw the United 787 conducting a side-step manoeuvre, switching its approach from 09L to 09R, after a control tower error.

“Tower, there is traffic landing 09R,” the EasyJet captain called, then added: “Go around 09R, go around.”

French investigation authority BEA says the 787 crew had seen the A320 on the runway and was preparing to abort the approach. The aircraft descended to 80ft some 250m from the threshold before it climbed away, passing over the A320 at about 300ft. 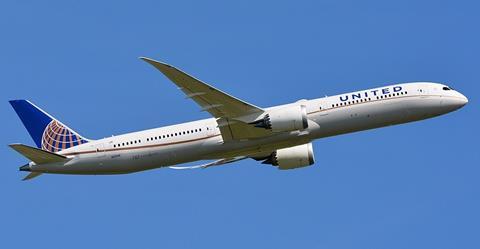 Investigators found the United 787-10, similar to this one, had been cleared to the wrong runway

The inquiry into the incident, on 20 July last year, has determined that the United 787, inbound from Newark, had been cleared for approach to runway 09L – separated from the parallel 09R by about 1,250ft.

Some 4nm ahead of the United aircraft, another 787, operated by Air France, was carrying out a parallel approach to 09R, its crew having opted for the longer runway owing to a technical issue.

Once the United aircraft was established on the 09L localiser, radio contact was transferred to the control tower.

But after the aircraft made contact, the tower controller responded that it was “number one for 09R, cleared to land 09R” – indicating the need to side-step and land on the parallel runway – although the controller believed they had cleared the 787 to 09L. BEA says the 787 captain, who was flying, considered a side-step manoeuvre to be common in the USA.

Although the crew sought a clarification, the inquiry says the first officer used the non-standard term “understand” before repeating the clearance and specifically mentioning the side-step. This query went unanswered.

BEA points out that, if there are doubts over an air traffic control instruction, the crew should ask for a reconfirmation rather than repeating what they think was heard.

But as the A320 moved onto the runway, the crew looked again at the aircraft and saw it was banking for 09R at about 300ft.

After the EasyJet captain alerted the tower and the United crew with the radio call, the tower instructed the 787 crew to go around and climb to 4,000ft. BEA says a runway incursion alarm simultaneously sounded in the tower. The 787 aborted its approach and eventually landed on 09L.