Dutch investigators have disclosed that an EasyJet Airbus A320 crew was forced to make an emergency stop to prevent a taxiing collision at Amsterdam Schiphol, after an SAS A320neo failed to give way at a junction.

The EasyJet aircraft had landed on runway 18R and the SAS jet on the parallel 18C on 3 February 2019.

After vacating, according to the Dutch Safety Board, the EasyJet A320 taxied rounded the southern end of 18C and headed north along taxiway Z, while the SAS jet was travelling south on taxiway B.

As the aircraft converged on a junction – between taxiway links A26 and A27 – the SAS crew was instructed to give way to the EasyJet aircraft coming from the right on taxiway Z.

The EasyJet crew was similarly informed that the other aircraft would wait for them to pass. 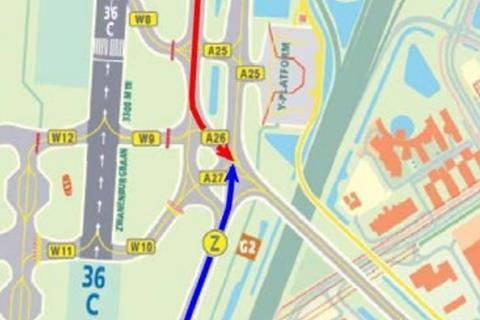 “Because many ground movements were taking place in his areas of responsibility, the ground controller gave the instruction in advance,” says the safety board, adding that the communication took place about 90s before the jets met.

Although both crews responded affirmatively, it adds, the SAS crew did not mention the place where they would need to give way or the direction from which the EasyJet aircraft would come.

When the encounter occurred, the EasyJet captain saw the SAS jet approach from left at an angle of about 45k and felt it was not slowing down. He reduced taxi speed to about 10-15kt as a precaution before making an emergency stop when it became clear the other jet would not halt.

“We’ve just had to pretty much emergency stop there and it was absolutely bloody awful,” one of the EasyJet pilots stated over the ground frequency. 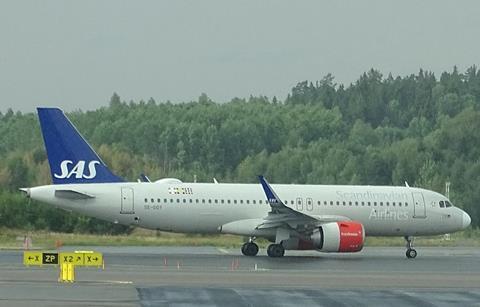 The A320neo was travelling at about 25kt and the EasyJet crew estimated that the aircraft’s wing-tip passed a few metres in front of their A320’s nose – the captain put the figure at 3-4m while the first officer thought 5-10m.

The SAS crew did not see the A320 until after the EasyJet pilots reported the close call, after which the SAS crew apologised and admitted being at fault.

These radio communications alerted the ground controller to the incident, which he had not noticed. He had been occasionally monitoring the two aircraft on ground radar, because visual monitoring in the night darkness was difficult, but had expected both crews to comply with instructions.

The safety board says the taxiway junction had not been designated as a ‘hot spot’ even though several taxiways converged on the location.

Crews must be “extra alert” to distinguish the different intersections, it adds, especially in darkness given the extensive background lighting and illumination of taxiways. Verification of clearances and proper responses are “extra important” to ensure pilots have a “clear picture” of the situation.