Qantas and Boeing are revising aircraft maintenance procedures after one of the carrier’s 787-9s flew from Melbourne to Los Angeles without having the covers of its engine static ports removed.

All four ports – two on each of the General Electric GEnx engines’ fan cowls – had been taped over, along with others on the fuselage, by an engineer as part of the parking process during the jet’s scheduled 39h layover at Melbourne.

But a second engineer, tasked with restoring the aircraft to flight on 21 September last year, was “unaware” that the fan cowl ports had been covered and did not check, says the Australian Transport Safety Bureau.

The aircraft (VH-ZNJ) subsequently took off for Los Angeles on 22 September with the ports still covered, although the inquiry states that the 787’s flight proceeded normally and the jet’s operation was unaffected.

Boeing’s cover procedure for the cowl ports includes fitting a 1m long streamer, which needs to be taped down to avoid being torn off by strong winds. This, however, reduces its visibility because it does not flap in the breeze. 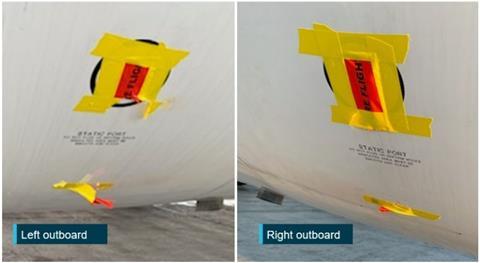 The inquiry says the ports are below eye-level, which can make them more difficult to identify without a specific check beneath the engine.

Qantas’s documentation for parking the aircraft was linked to Boeing procedures, it adds, but the restoration instructions were not.

“This was a missed opportunity to assist engineers to readily access the current procedures and determine which ports were covered,” the inquiry states.

It also says that Qantas’s maintenance procedures, while requiring the static ports to be covered, did not specify locations – allowing “potentially different interpretations” between engineers. Warnings were “more in line” with the fuselage static ports, it adds, than potential issues with those on the cowls or fin.

“As it was likely that different engineers would park and restore the aircraft, listing the static port locations with a separate endorsement for each would have eased identification of which ports were covered,” it says. 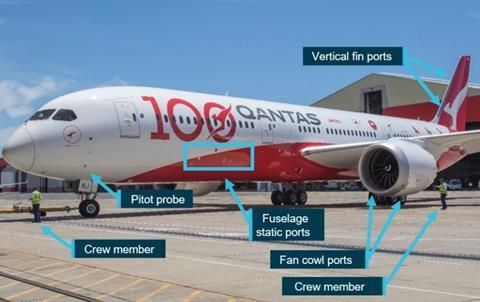 Neither the Dnata dispatcher nor the aircraft’s crew managed to detect the presence of the static port covers.

The inquiry says expectation bias might have played a role, with people more likely to detect targets that are expected than those not expected. It also points out that one of the pilots found a pitot cover on the ground during the walk-round, and tried to locate an engineer, and this might have resulted in distraction from the inspection.

Qantas has highlighted the location of the cowl ports – and the fact they might be covered during parking – to cockpit, engineering and ramp personnel, and amended its parking and restoration instructions to reference Boeing’s procedures.

Boeing is scheduled to revise the maintenance manual in June to include a procedural requirement to add a warning tag to the aircraft’s control column specifically stating that the engine static ports are covered.