Ethiopia’s aircraft accident investigation bureau says its inquiry into the fatal Boeing 737 Max 8 crash near Addis Ababa is in its final stages.

Preliminary findings from the inquiry into the Ethiopian accident have indicated that, like the Indonesian event, the crew was unable to restore control of the jet after faulty angle-of-attack information caused the flight-control system to trim the stabiliser increasingly nose-down.

The investigation bureau, in a second-anniversary update to progress, says it is “in the final stage to release the report”.

It points out that the pandemic and the resulting national lockdowns have had a “serious impact” on the work into the cause of the ET302 accident.

Despite the difficulties, it says, investigators have been “continuously working on the accident report” in preparation for public release. The bureau has not given any further findings from the probe or any indication of its conclusions. 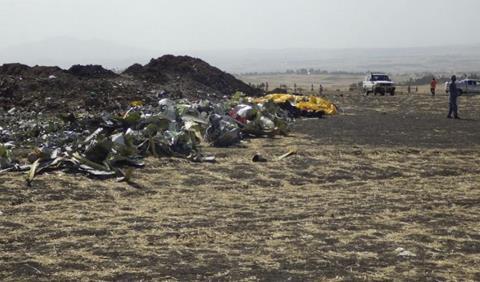 Wreckage of flight ET302 at the accident site outside Addis Ababa