Investigators have determined that the crew of an Etihad Airways Boeing 787-10 did not set the correct destination pressure reference for the altimeter before the twinjet dipped far below the glideslope on approach to Abu Dhabi.

The passenger aircraft (A6-BMD) had been conducting a freight flight from Beijing on 6 June last year, with only a crew of three on board.

On approach to runway 31L the aircraft remained some 300ft below the correct glidepath.

At a distance of 1.3nm to the threshold its indicated altitude read 570ft but the aircraft had actually descended to 210ft above ground. The crew executed a go-around after seeing that the runway’s precision-approach path indicator lamps were all showing ‘red’ – indicating the jet was too low.

According to the United Arab Emirates’ air accident investigation sector the crew did not pre-set the QNH barometric pressure reference to the correct figure for the destination airport during the descent procedure.

The pressure setting for Abu Dhabi was 999mb – as given on the ATIS automatic terminal information service – but the pre-set figure remained at 1009mb, the setting which the crew had used at Beijing. 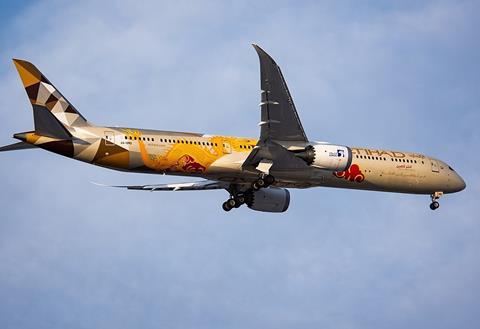 When the crew transitioned from the standard 1013mb pressure setting used in cruise to the pre-set figure for the destination, the altimeter would have incorrectly calculated the aircraft’s altitude was higher that its true figure, because the QNH pressure at Abu Dhabi was lower than that in Beijing.

The inquiry points out that all three crew members were “unaware” of the incorrect Abu Dhabi pressure setting, even though the captain had confirmed receiving the airport’s ATIS information which included the correct figure.

It states that the crew had become “fixated” on energy management, at the expense of monitoring other functions, because they had been concerned the aircraft was flying high as it neared a waypoint on the border between Dubai and Abu Dhabi.

This focus on managing the jet’s energy resulted in “inadequate” checks on the QNH pressure setting during transition, the inquiry adds.

While the pilots carried out a go-around upon seeing the red PAPI lamp display, the aircraft did not climb to the correct 4,000ft missed-approach altitude but – because the altimeter pressure reference was still incorrect – levelled at 3,700ft.

The inquiry indicates that, during the missed approach and subsequent vectoring, the crew was informed a number of times about the correct pressure setting, which at that point was 998mb.

At some point the crew realised the error and changed the QNH setting to the correct value.

But the confusion and doubt over the go-around and the aircraft’s altitude spurred Abu Dhabi tower controllers to seek an urgent check on the PAPI lamps. Approach control was asked to extend the 787’s downwind leg in order for the check to be carried out.

But while ground personnel were sent to runway 31L for the PAPI check, they could not enter the runway area because the 787 was already on its second approach. As the aircraft neared touchdown the pilots were asked to monitor the PAPI lamps and, after the jet landed safely, the crew confirmed the PAPI lamps were displaying correctly.

Etihad Airways highlighted the importance of correct altimeter settings following the incident, and introduced a requirement to confirm QNH setting prior to initial approach fix.