Investigators are seeking a reduction in height criteria for assisted emergency exit escape, after passengers evacuating a Flybe Embraer 195 re-entered the jet after refusing to jump from the wing.

Several passengers were escorted back into the aircraft and directed to other exits where slides had been deployed.

The aircraft had been departing Exeter on 28 February last year but, as its thrust levers were advanced for take-off, the crew detected smoke entering the cockpit, while the cabin crew reported smoke and fumes.

Take-off was halted and the captain ordered an evacuation.

While the emergency procedure required the flaps to be extended – from position ‘1’ to position ‘5’ – the pilots shut down the engines just 2s after activating the flap lever. The flaps had barely moved as a result, extending from 6.9° to just 7.2°. 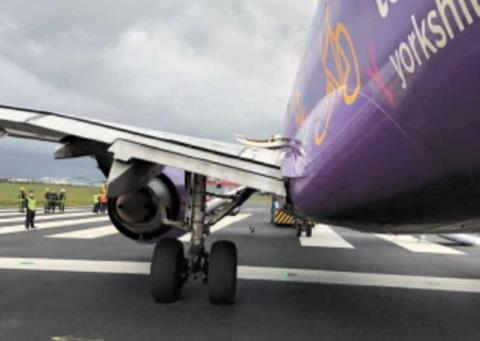 “The large drop to the ground and the absence of obvious immediate danger meant that passengers did not feel compelled to jump or slide off the wing,” says the UK Air Accidents Investigation Branch.

“This led to passengers gathering on the wing surface, which was reported as slippery, increasing the risk of slips and falls.”

It adds that the increasing number of passengers on the wing created a “bottleneck” in the cabin around the overwing exits, delaying the evacuation.

Some passengers “unwilling” to risk jumping from the wing had to be taken back inside to leave from the aft exits.

Under US and European certification criteria, exits only need slides if they are located at least 1.8m above the ground.

“For lesser heights, passengers are expected to jump down,” says the inquiry.

Some passengers attempted to take baggage with them, it states, but most complied with the emergency evacuation instructions and left belongings behind.

Embraer 195s have six exits – two of them overwing – but passengers reported being confused, after stepping onto the wing, as to how to reach the ground. Some received minor injuries by jumping, and at least one was injured slipping on the wing.

Although a 61cm-wide walkway was marked, with arrows, on the wing root, the inquiry says the need to climb off via the trailing edge after leaving the overwing exit was “not obvious”, according to passenger remarks after the incident.

Passengers seated next to overwing exits had been briefed by cabin crew beforehand, but this did not include instructions on leaving the wing.

“Safety information cards…included diagrams showing the direction of evacuation from the wing,” says the inquiry. “But it was not clear whether passengers would understand that they need to slide off the wing.”

Flybe subsequently revised its briefing to overwing exit passengers after the event, to highlight the lack of escape slide and the need to help others to evacuate.

Investigators point out that the evacuation took place in daylight and good visibility, and that poor weather or smoke might hinder identification of exit routes. The inquiry is recommending that US and European regulators not only look at reducing the height limit for which assisted escape is required, but amend certification criteria for the design and conspicuity of escape-route markings.

Several passengers leaving the Flybe jet by the aft slides remarked that they had found them to be “very steep” and were surprised by the speed at which they slid.

“Cabin crew noticed that some passengers hesitated when instructed to jump and slide,” the inquiry says, adding that the aft slides do not round-out, unlike the front slides, and that this resulted in a number of injuries.

Investigators traced the origin of the smoke and fumes which triggered the evacuation to an incorrectly-performed engine compressor wash procedure carried out the night before the flight.