US investigators have found that two sightseeing aircraft were effectively invisible to their pilots before they fatally collided over an Alaskan lake, highlighting the inadequacy of conventional see-and-avoid strategies.

The inquiry believes cockpit structures on a descending De Havilland Canada DHC-3 Otter obscured the pilot’s view of a DHC-2 Beaver as the two aircraft converged over Mahoney Lake.

About 11s before the collision, the National Transportation Safety Board says, analysis indicates the Beaver would have been hidden behind the Otter’s left-hand window post. 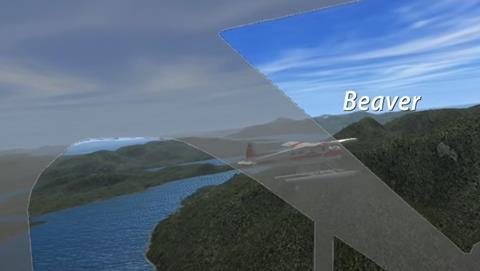 Investigators also think the Beaver pilot could not see the Otter approaching from the right owing to aircraft structure and a view limited by the passenger seated to his right.

“It is unlikely the Beaver pilot could have seen the Otter prior to the collision,” the inquiry says.

Investigators revealed that the converging Otter could clearly be seen from the Beaver’s third passenger row, and showed an image of the aircraft captured by a Beaver passenger moments before the impact. 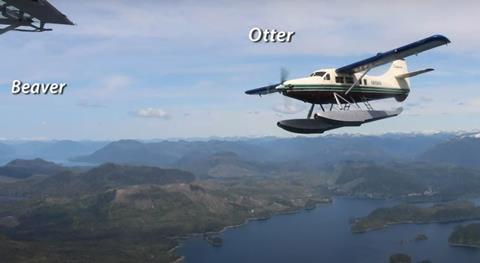 Captured by a passenger on the Beaver, the Otter is shown moments before the collision

The float-equipped aircraft collided at 3,350ft, destroying the Beaver – which broke up in mid-air – and badly damaging the Otter which turned 180° and descended into the water of the George Inlet adjacent to the lake.

None of the five Beaver occupants survived and the accident also resulted in a fatality among the 11 on board the Otter.

“This accident clearly demonstrates why [see-and-avoid is] just not enough,” says NTSB chairman Robert Sumwalt, pointing out that the two pilots involved were experienced.

NTSB human performance specialist William Bramble adds that the visibility situation was exacerbated by the small size, lack of apparent motion, and limitations of perception against a complex background.

The pilots’ inability to carry out effective see-and-avoid measures was further undermined by technological issues which prevented traffic-alerting systems from functioning.

“Neither pilot received an alert before the collision,” says the inquiry into the 13 May 2019 accident.

Both the Otter and the Beaver were equipped with ADS-B surveillance systems intended to provide the pilots with increased traffic awareness.

The Beaver pilot accessed this surveillance data through an iPad display running an application called ForeFlight, while the Otter was fitted with a Chelton FlightLogic display.

While the Beaver’s iPad system had visual and aural alerting capability, it required pressure altitude information to be transmitted by the Otter.

But investigators found that the Otter was not transmitting this information because the relevant selector knob for the aircraft’s system was off. A checklist did not include an item to ensure the knob was selected on before take-off.

“Leaving the [selector knob] in the off position constituted an unacceptable hazard that could have been mitigated through a procedural safeguard,” says the inquiry, stating that the checklist used by the Otter’s operator, Taquan Air, was “inadequate”.

Although the US FAA had implemented a programme called Capstone to enhance Alaskan air safety, a post-Capstone upgrade scheme which modernised ADS-B components resulted in the loss of the Otter’s alerting capabilities in its ADS-B avionics.

The investigation found that each conflicting aircraft was captured on the other’s display, but no alerts were generated. Under normal circumstances the Beaver’s ForeFlight application would have alerted 1min 44s before the collision, while the inquiry estimates the Chelton system on the Otter would have provided a warning 37s beforehand.

“There’s technology available to alert pilots to a collision risk when the see-and-avoid concept fails them,” says Sumwalt. “But there were no alerts.”