Investigators have revealed that a Gulfstream GIV took off from Santo Domingo with a spoiler asymmetry shortly before diverting to another airport in the city, where it crashed fatally during its approach to land.

The aircraft – owned by Helidosa Aviation Group, and registered HI1050 – had arrived at Santo Domingo’s La Isabela airport from Puerto Rico on 15 December.

Communications between the crew and the company indicated that the right wing’s spoiler actuators were to be replaced at La Isabela.

Upon arrival, the aircraft underwent 3h of maintenance in a Helidosa-owned hangar before passengers boarded for a flight to Orlando, says Dominican Republic investigation authority CIAA in preliminary findings.

Although a spare aircraft was available, the operator testified that passengers wanted to fly on the jet being serviced.

Surveillance video shows the aircraft was “still being worked on” after it left the hangar, says the inquiry, with more than five maintenance personnel under the right wing. The images also captured the ailerons moving and spoilers on both wings repeatedly extending and retracting.

All the spoilers were retracted at the time the aircraft was towed to a parking position on the main apron.

But after the passengers boarded, video footage indicated asymmetric behaviour of the spoilers during flight-control movements. 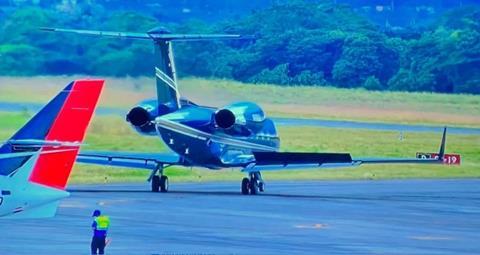 When the aircraft lifted off, it did so with a right-wing low attitude, the spoilers on this wing still extended.

The asymmetry – the right-wing spoilers deployed, but those on the left wing retracted – continued to be evident as the aircraft passed close to the Quisqueya stadium, in the south of the city, where a witness attending a baseball game captured pictures of the jet.

CIAA says the aircraft carried out a left-hand orbit above this part of the city, the crew having informed air traffic control of a hydraulic problem and then reporting it as an aileron issue. The pilots declared an emergency, initially opting to return to La Isabela before requesting vectors to divert to the main Las Americas airport situated to the east.

Although the jet was cleared to land on Las Americas’ runway 35, it passed over it while turning left for the approach, striking trees, then travelling through a wooded area for 340m, breaking up and coming to rest 200m off the runway’s right side, beyond the security fence.

None of those on board – six passengers and three crew members – survived the accident, which occurred about 16min after the jet took off.

Records retrieved from Dominican civil aviation regulators show the aircraft was a GIVSP variant, manufactured in 2002 and registered in the republic in February 2019. It had passed its latest continuous airworthiness inspection in November last year and, by the date of the crash, had accumulated 6,258h.