Fatalities as military An-26 crashes near Almaty

Kazakhstan’s government has disclosed that four fatalities resulted from a military Antonov An-26 accident at Almaty on 13 March.

Radar contact with the aircraft, operating from the capital Nur-Sultan, was lost at 17:22 according to the country’s ministry of emergency situations.

The An-26 came down near Almaty airport, it adds.

Kazakhstan’s defence ministry says the aircraft was being operated by the aviation service of the national security committee, and that it was carrying servicemen.

Firefighting, medical and search-and-rescue personnel attended the scene. “Fire on the aircraft was extinguished,” the emergencies ministry states.

No further details have been disclosed regarding the circumstances of the accident.

Meteorological information from Almaty airport at the time of the loss of contact indicates reduced visibility, freezing fog, mist and drizzle.

Ukrainian armed forces suffered a fatal An-26 accident in September last year, as the aircraft carried out an approach to the Chuhuiv air base near Kharkiv. The aircraft had been carrying out pilot-training exercises with a group of cadets. 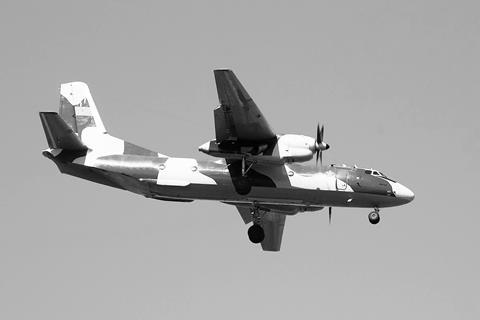