Flawed firefighting tactics and inadequate accident site surveillance contributed to the sole fatality after an Emirates Boeing 777-300 crashed on the runway at Dubai during a failed go-around.

While two initial foam vehicles – known as Fire 6 and Fire 10 – arrived at the scene of the accident within 90s, they parked behind the trailing edge of the right wing.

This wing was in contact with the ground owing to the retracted landing-gear and separation of the right engine, obscuring the view of the fuselage underside and a fire which had broken out in the right-hand landing-gear bay.

Dense black smoke was being emitted from underneath the right wing root leading edge and “should have alerted” the fire commander to assess the fire’s dynamics and the source of this smoke, says the General Civil Aviation Authority inquiry.

No fire vehicles were positioned forward of the right wing and fire commander’s own vehicle was parked in a location which limited his view of the site.

Firefighters were, however, placed in close proximity to the wing root and “should have realised” the developing situation, the inquiry says, and relayed this information to the commander. 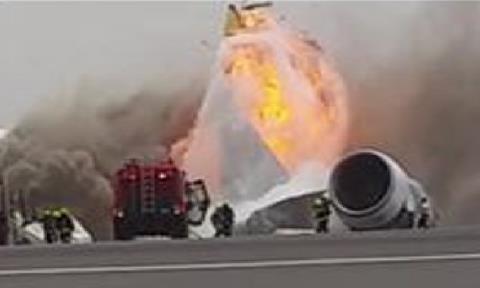 Although personnel from Fire 6 were cooling the wing root with a sideline, this had no effect on the fire burning in the landing-gear bay which was continuously heating the right side of the centre fuel tank. Firefighters from Fire 10 started to move in closer, deploying a sideline to start tackling the landing-gear.

Both Fire 6 and Fire 10 exhausted their water supplies about 20s before some 100kg of residual fuel in the centre tank ignited in a vapour explosion and tore a 15m panel from the upper inboard wing skin. The panel struck one of the sideline firefighters, fatally injuring him, and landed behind the wing.

This explosion, which occurred 9min 40s after the aircraft came to rest, lifted the cabin floor over the tank and provided a path for fire and smoke to enter the passenger cabin, while fuel in the right wing’s main tank was no longer contained behind a rib separating it from the centre tank.

“As a result, the fire dynamics changed and the fire became more intense,” says the inquiry. The firefighting changed from being offensive to defensive, with greater attention paid to firefighter safety because there was no prospect of saving the aircraft.

But the inquiry says large volumes of water were used in applying “unco-ordinated” tactics which “prolonged” the time to bring the fire under control. 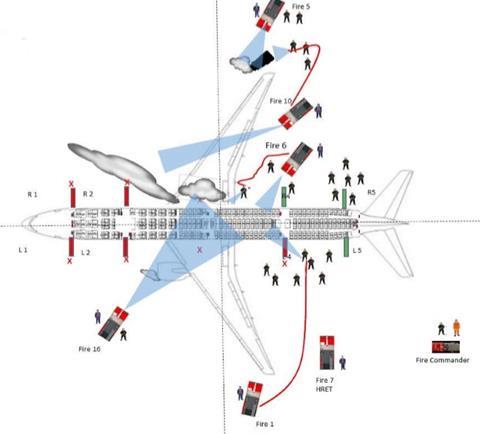 Dubai airport conducted an emergency exercise in June 2015, about 14 months before the 3 August 2016 accident, based on an Airbus A380 overrun scenario.

“The exercise highlighted deficiencies in the communications system and the consequences of decisions taken based on poor information,” the inquiry says, adding that the deficiencies identified during the exercise – including poor training – were “accurate indicators” of real shortcomings observed during the 777 accident.

“There were many similarities [during the exercises] that were repeated during the accident response,” it adds.

No dynamic risk assessment of the 777 situation was carried out and sideline firefighters were moving close to fuel tanks despite the potential explosion hazard. Crew managers did not communicate details of the firefighting actions to the fire commander.

Investigators found the airport’s training system could not detect the lack of knowledge and understanding of incident command and firefighting tactics.