Civil helicopter operators are being advised to reduce airspeed if they are unable to avoid flying at low altitude, as a defensive measure against the risk of serious birdstrike.

Rotorcraft manufacturers should incorporate a dedicated caution in flight manuals warning operators that flight below 2,500ft increases the likelihood and severity of a bird collision, says the European Union Aviation Safety Agency.

In a newly-issued safety bulletin, EASA says the revision should advise pilots that operations at such heights “should be conducted with reduced airspeeds”.

EASA stresses that civil rotorcraft have “very little ballistic protection”, unlike military designs, and only 10% of the European Union civil helicopter fleet is certified to the latest resistance criteria.

“Most of the EU civilian helicopter fleet is not designed to be resistant to birdstrike,” it states. 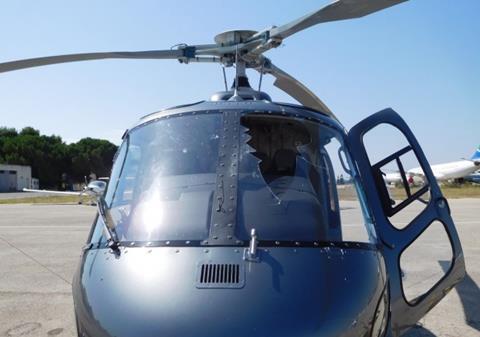 This H125 was hit by a bird of prey at 1,100ft near Nimes-Garon badly injuring a passenger

More than 75% of birdstrikes occur at airspeeds above 80kt, says EASA, and crews should be reminded that any speed reduction will provide birds with more time to take evasive action and reduce the kinetic energy of any impact.

Pilots taking avoiding action, EASA suggests, should favour an upward direction because birds will tend to break downwards if they recognise conflict.

The authority also recommends continuous use of taxi or landing lights during sunny conditions and at night, with use of pulsed-mode lighting – an available retrofit – during partly-cloudy conditions.

“Pulsing lighting accentuates the speed and directional movement of the aircraft, thereby increasing aircraft recognition by the bird,” it says.

Crews should plan flights at the highest altitude practical, and a minimum of 2,500ft where possible, particularly over areas of wetland or inland water.

EASA’s safety bulletin, which does not include mandatory action, also contains a broad range of considerations – such as reporting of bird concentrations and awareness of infrastructure changes – to support birdstrike prevention.