Kenyan investigators have disclosed that the crew of a Fokker 50 continued a take-off roll, despite multiple alerts apparently warning of a serious engine problem, before the aircraft crashed some 50s after becoming airborne.

The inquiry into the accident, involving a Skyward International Aviation turboprop departing Nairobi’s main international airport, found that 27 high-level ‘triple-chime’ alerts had sounded as the aircraft rolled along runway 06.

Aural alerts had commenced as early as 8s after the take-off was initiated but, while the aircraft was well below the V1 decision speed, the crew did not act to abort the take-off roll.

“On [its] ground roll for take-off, the aircraft seemed to take [more] runway than anticipated before attaining the take-off speed,” the Kenyan air accident investigation department states, indicating that the roll lasted over 90s.

The aircraft lifted off from the high-elevation airport at about 100kt but “barely climbing”, the inquiry says, reaching no more than 50ft above ground after about 20s while continually deviating to the left of the extended centreline.

It subsequently collided with a building 2,100m north-north-east of the runway end. None of the four occupants – two pilots, an engineer and a loadmaster – survived. 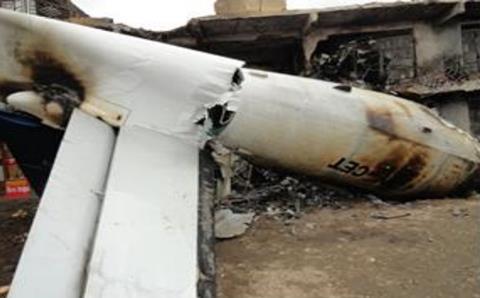 The aircraft had been conducting a cargo service to Mogadishu, in darkness, on 2 July 2014.

Investigators found discrepancies in the loadsheet for the aircraft and analysis of the cargo, including a shipment of the mild narcotic qat, indicated that the aircraft was 500-1,500kg above its maximum certified gross weight at take-off.

The captain, who had been flying, had logged over 6,800h in command of Fokker 50s, although the inquiry says it was “unable to determine” whether either pilot had demonstrated an ability to fly the turboprop with one engine inoperable.

Analysis of recordings from the previous positioning flight by the aircraft (5Y-CET) showed a ‘three-chime’ alert had occurred, and that the crew spent time trying to diagnose the problem. Despite the evidence from the cockpit-voice recorder, the monitoring pilot for the flight “denied knowledge” of any anomalies, says the inquiry.

Investigators could not obtain any evidence that any problem was recorded in the technical log, nor that any maintenance was conducted in relation to the apparent anomaly. At least one of the crew members – possibly the captain – from the positioning flight was among those fatally injured during the subsequent accident.

While the ‘three-chime’ alert sounded repeatedly during the ill-fated flight’s take-off roll, the inquiry says “it is not clear” why the crew continued to proceed with the flight, particularly given that Fokker documentation requires an abort under such circumstances.

Cirium fleets data shows the aircraft was originally delivered to Lufthansa CityLine in 1992 and served with Air Nostrum and Avianca Brazil before being transferred to Skyward from Dutch operator Denim in May 2014. It had been operated in Kenya for just 92h before the crash.

Although the accident occurred in 2014, the inquiry was only signed off at the end of November last year and published by the transport ministry in January.