French Bee A350 deviated during go-around after alarm startled pilot

French investigators have detailed how a French Bee Airbus A350-900 sharply deviated from the missed-approach pattern at Paris Orly, when one of its pilots was startled and temporarily incapacitated just after an unexpected windshear alarm.

The twinjet (F-HREV) was nearing the end of a long service from San Francisco on 4 February last year, having departed nearly 3h late, and had been established on the ILS approach for runway 25.

Weather conditions were good, says French investigation authority BEA, and the crew was “surprised” when the predictive windshear alarm triggered at 1,350ft. The aircraft was being flown manually by the first officer who had disengaged the autopilot a few seconds beforehand.

As the captain ordered a go-around, in response to the alarm, the first officer applied a nose-up and slight right-roll command to the sidestick, and advanced the thrust levers to go-around power.

The captain then ordered ‘soft’ go-around mode – a reduced-thrust setting from the autothrottle – with which the first officer complied. But the aircraft continued to climb with a pitch of 8°, despite the flight directors showing the pitch should be reduced.

“No sidestick order is recorded,” says BEA in its inquiry. 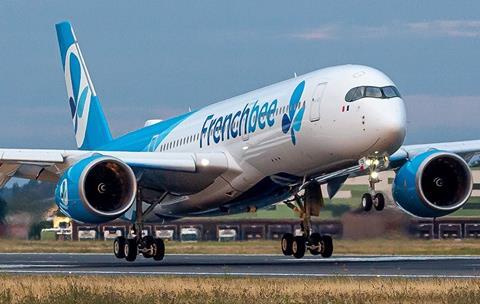 As the aircraft was reconfigured for the go-around, air traffic control instructed the A350 to climb to the 2,000ft missed-approach altitude.

But BEA says the first officer “did not react” to this instruction and the aircraft exceeded the altitude clearance, continuing to climb at 1,800ft/min with 8° nose-up pitch.

“No movement is recorded on the sidesticks,” the inquiry says. The altitude alert warning sounded continuously 6s after the A350 passed 2,000ft and the first officer did not level the aircraft until it reached 2,800ft.

Although the autothrottle reduced engine power to idle, the autopilot remained disengaged and the jet did not automatically descend to the selected altitude of 2,000ft.

It passed the threshold of runway 25 and, although air traffic control instructed a left turn to 180°, the disengaged autopilots meant the aircraft did not respond to changes in the selected heading.

The captain told the inquiry that he realised the aircraft was too high and needed to turn left – but that the first officer was not reacting to his instructions nor those of air traffic control.

BEA says the captain took control of the aircraft – about 1min 20s after the initial go-around order – but another crew member, probably the first officer, deployed the speedbrakes unannounced. This crucially changed the configuration of the jet and adjusted the threshold for lowest-selectable speed, raising it from 166kt to 188kt.

While the captain engaged the autopilot – resulting in the aircraft’s turning left and descending towards the 2,000ft target altitude – the speedbrake deployment meant a low-energy alert triggered because the aircraft was flying at 175kt, below the threshold.

Along with the speed situation the captain’s workload was further increased by the presence of conflicting traffic, from an Air France flight taking off from runway 24, which generated a short-term conflict alert on air traffic control displays.

The captain advanced the thrust levers to go-around power, intending to increase the speed and stabilise the jet at 2,000ft. This automatically resulted in the speedbrakes retracting, although the speedbrake lever remained extended, and a master caution alarm sounded.

As the A350 entered the left turn, air traffic controllers saw the jet overfly the control tower at about 2,500ft and displaced 650m to the right of the runway 25 centreline.

BEA says the left turn was stable, even though “dynamic” and “large” inputs were recorded from the captain’s sidestick. The aircraft’s speed increased and it descended at 2,200ft/min, passing 2,000ft at around 235kt, around the same time as it reached minimum separation – about 1.69nm horizontally and 75ft vertically – with the Air France flight, although the two trajectories were not converging.

The inquiry says the relief pilot asked several times about using the autopilot to relieve workload, and the first officer was pressing mode-changing buttons without co-ordinating these actions with the captain.

BEA says this prompted the captain to state firmly: “Everyone quiet. I’m the only one giving orders.”

The A350 breached the cleared altitude again, descending to 1,800ft and triggering another alert.

It continued to descend to 1,550ft and the captain disengaged the autopilot, before air traffic control instructed a climb to 3,000ft. The captain re-engaged the autopilot and the aircraft, by this time on a heading of 180°, started to climb and stabilized at 3,000ft and 220kt about 4min after the windshear alarm.

BEA says first officer declared himself fit enough to resume an active role. The captain continued as the flying pilot, with the first officer monitoring, and the A350 was vectored to another ILS approach to runway 25 where it landed without further incident.

The inquiry says the first officer became “absent” for a few minutes after being startled by the unexpected windshear alarm, combined with the subsequent change in pace and increased workload, and still thought the aircraft was operating under the autopilot even though it had just been disengaged.

“This cognitive incapacity was initially neither identified by the captain nor by the [relief pilot],” says BEA, which was unable to attribute the incapacitation to a specific issue.

With the first officer unable to assist with the go-around the captain had to take on a “significant” workload, it adds, piloting the aircraft and handling navigation, radio communications, and the conflict with the Air France jet, plus the disruption arising from the low-energy state as the speedbrakes were deployed. The highly-charged situation, says BEA, meant the captain’s manual piloting ability was affected.

BEA notes some common elements with the high-profile A330 crash involving Air France flight AF447 in the South Atlantic in 2009, particularly the startle effect which resulted in destabilisation of the aircraft’s course and a deterioration in the crew’s understanding of the aircraft’s behaviour.