Dutch investigators have warned that Amsterdam Schiphol is approaching a limit in terms of the amount of traffic it can safety handle, owing to the complexity of the airport’s design.

The Dutch Safety Board made the remark after concluding an inquiry into a serious airprox incident that occurred during simultaneous use of intersecting runways on 29 March 2018.

Investigators state that a KLM Boeing 737-700 had been approaching runway 18C but its crew opted to execute a go-around.

The runway controller had already granted take-off clearance to a Transavia 737-800 which was departing runway 24.

Schiphol’s layout means the extended departure centreline of runway 24 immediately crosses that of 18C. The incident took place at 19:56, a few minutes before sunset.

The controller realised the potential for conflict and tried to order the Transavia crew to abort take-off, but used the wrong flight number in the instruction. As a result, the crew did not respond and the 737-800 took off.

“Because the two runways converge, the aircraft found themselves on a course which was set to intersect,” says the inquiry, adding that an “undesirable” loss of separation occurred.

The controller subsequently instructed the two aircraft to perform divergent turns to establish a safer distance between them. 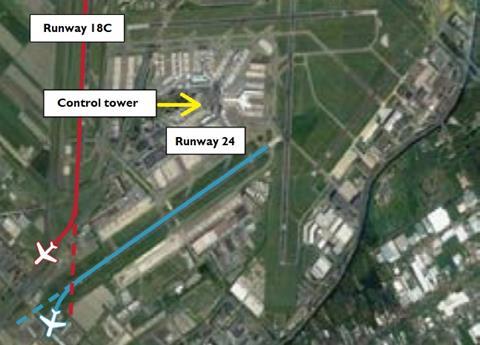 “No actual collision hazard occurred,” says the inquiry, pointing out that both crews had also noted the conflict risk. The 737s’ closest approach was 0.5nm horizontally and 300ft vertically.

While the normal simultaneous-runway procedure is to refrain from clearing aircraft for take-off until an inbound flight has landed, air navigation service LVNL’s operating manual allows an exception, permitting reduced separation, under certain conditions.

The Dutch Safety Board has questioned the “legitimacy” of such a procedure, given that it runs the risk of conflict in the event of a go-around – a situation which has twice arisen in the past, in 2007 and 2015.

“The question is whether the advantage gained, namely increased capacity, outweighs the potential hazard that can arise,” it says, adding that Schiphol’s complexity is such that the limit of safe traffic handling is “in sight”.

Investigators found the procedure had been transferred from a previous LVNL manual to the current operations manual, but the method of this transfer could not be established.

Although the Dutch transport inspectorate, ILT, did not “explicitly” approve the procedure, it did approve the operations manual “in its entirety” – and so the procedure was “implicitly permitted”, says the inquiry.

The Dutch Safety Board is recommending that the procedure be withdrawn from the operating manual.

Chairman Jeroen Dijsselbloem says: “The safety risk seems small in this case, but the impact of a collision between two aircraft is so great that you shouldn’t want to take on this risk.”

LVNL should maintain the basic rule, the inquiry adds, that take-off clearance can only be issued after confirmation that arriving aircraft on the dependent runway have either landed, or still remain at least 2nm from the threshold.

The inquiry’s recommendation is “important” and “requires careful consideration”, says LVNL in response, pointing out that Schiphol’s collective integral safety management system had already concluded that the controversial procedure needed changing after the incident.

“With this in mind, LVNL is now energetically working on the details of adjusting the procedure for converging runway use,” it adds.