Indonesia will deploy three helicopters and 14 ships over the next two days to aid in the search and recovery of a Lion Air Boeing 737 Max 8 that crashed on 29 October.

Through its main and subsidiary twitter accounts, national search and rescue agency Basarnas says it will deploy ships over nine segments, as well as sonar equipment in four others. Helicopters will meanwhile concentrate on the coordinates where the 737, registered PK-LQP, is likely to have crashed. More debris has been found, including what appears to be a badly damaged section of a seat back table.

At the same time, Basarnas will deploy remotely-operated underwater vehicles and multibeam echosounders to locate the wreckage of the aircraft, which was operating as flight JT610 from Jakarta to Pangkal Pinang.

In the early hours of 30 October, Lion Air said that 24 body bags were brought ashore. Local media reports indicate that the bodies will be taken to a police hospital in Jakarta for identification. Family members have been brought to Jakarta, adds the airline. 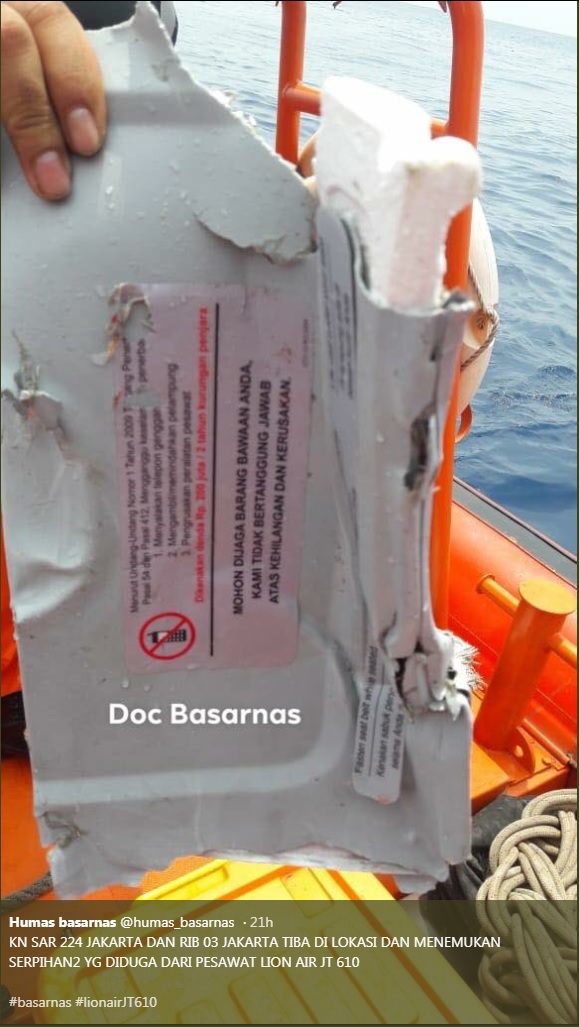 Boeing, the Federal Aviation Administration and National Transportation Safety Board have also pledged their support for the investigation. Canberra has ordered its government officials not to fly on Lion Air or its associated subsidiary carriers while investigations are active.

Overnight, tweets of an aircraft and maintenance log surfaced, purportedly from the flight that PK-LQP operated before JT610. The log shows that the jet operated flight JT43 on the Denpasar-Jakarta route on 28 October. The crew for that service had found an altitude disagreement after take off and a sensing of difference in pressure. It flew the entire flight at 28,000ft.

Lion Air Group chief executive Edward Sirait has said that this issue was dealt with prior to PK-LQP's aircraft's operating JT610.

Flight JT610 took off from Jakarta's Soekarno-Hatta International airport at 06.20 local time for the town of Pangkal Pinang with 189 passengers and crew, before losing contact 13 minutes later. It crashed into the sea, near the town of Karawang, in the province of West Java.

Flight Fleets Analyzer shows that the aircraft was delivered on 13 August 2018, and bears serial number 43000. It is equipped with 180 seats, and managed by CMIG Leasing.