UK investigators have determined that a high-speed landing on a wet runway resulted in a Montserrat Airways Britten-Norman Islander overrunning, spinning through 180°, and sliding backwards down a steep incline.

The aircraft (VP-MNI) came to rest when its tail snagged in the security fence at Montserrat airport.

It had been arriving from Antigua on 23 September last year and made a normal approach to runway 10 in light tailwind, according to the UK Air Accidents Investigation Branch.

The inquiry states that a shower had preceded the aircraft’s approach. 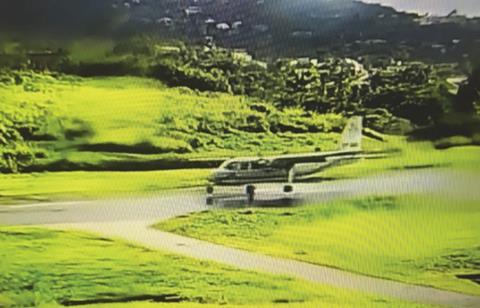 Montserrat tower CCTV indicated the Islander touched down at 79kt

Initially the sole pilot had been cleared to runway 10, in line with the south-easterly wind, but when the winds shifted to south-westerly the pilot was offered runway 28.

The pilot chose, however, to stay with runway 10 – which had available landing distance of 540m – and embarked on a normal 6° glidepath with full flap and an approach speed of 65kt by 1,000ft.

This approach speed would normally be reduced to 58kt at the threshold.

But the Islander was travelling much faster when it landed. Although the aircraft was not fitted with GPS equipment and no groundspeed information was available, investigators estimated the touchdown speed at 79kt based on closed-circuit television images from the control tower.

“The pilot applied the toe-brakes with the pressures appearing normal, and then released them momentarily, as they had little effect, before applying them again,” the inquiry says.

“The aircraft was not slowing down and, as it passed the taxiway intersection, the brakes were applied much harder, again with little effect.”

As the end of the runway approached, the pilot applied full right aileron and right rudder, intending to turn onto the adjacent grass area and avoid an overrun. But the aircraft skidded and spun through 180° before travelling backwards off the edge of the airfield. 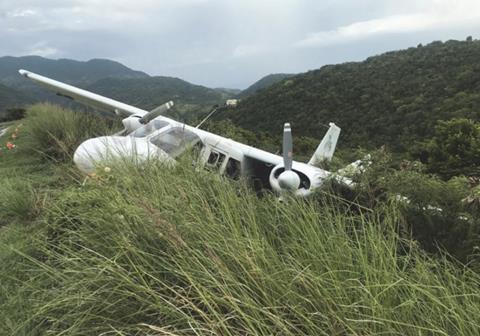 None of the occupants was injured but the aircraft suffered damage

None of the seven occupants was injured but the aircraft was substantially damaged, with a fractured horizontal stabiliser and bent elevator, dented wing-tip fairing, and displaced anti-collision light.

“It appears that either increased airspeed over the normal approach speed of 65kt was used, or a significant change in wind speed and direction led to an increased tailwind component,” says the inquiry, adding that this “greatly increased” the required landing distance beyond that available.

Safety findings include a recommendation to install a means of arresting overrunning aircraft.