French investigators believe an Embraer ERJ-145 crew’s premature acceptance of take-off clearance disrupted the landing of a Boeing 717 on low-visibility approach to the same Strasbourg runway.

Investigation authority BEA says Cat III conditions prevailed at the time. The crew of the Hop ERJ-145, bound for Amsterdam, had accepted an immediate take-off clearance while still 350m from the runway stop-bar.

Owing to the reduced visibility, and absence of ground radar, the controller was unaware of the ERJ’s position.

BEA says the ERJ pilots “could not judge” whether they were capable of carrying out an immediate take-off – and the carrier’s procedures would not have permitted it – because they had not received readiness confirmation from the cabin crew. But it believes the pilots’ decision was motivated by their wanting to meet the take-off slot.

The Volotea 717 was conducting an automatic Cat III approach to runway 23 at the time. 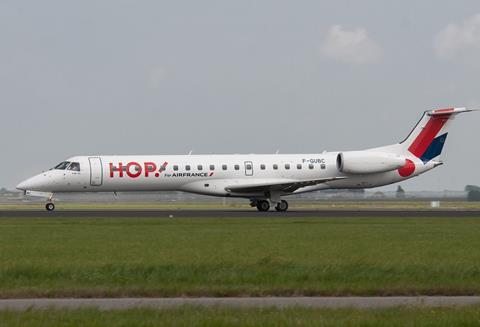 Although the 717 crew had been advised of the departing ERJ while 2.8nm from the threshold, the ERJ only started applying take-off power when the 717 was about 1nm distant.

The controller did not instruct the 717 to execute a go-around, instead clearing its crew to land as the ERJ lifted off, even though the Hop aircraft had not cleared the sensitive zone of the ILS.

BEA says this was “contrary” to air navigation services procedures, but adds that the controller wanted to avoid having the “more complex” situation of two aircraft flying in close proximity without visual contact.

The inquiry points out, however, that during the flare, the 717 deviated to the left of the centreline and its captain intervened to correct the course and land the aircraft.

BEA believes the automatic landing was “probably disrupted” by the ERJ’s presence in the sensitive area of the ILS – although it acknowledges that the possibility of wake turbulence from the ERJ cannot be ruled out.

BEA, which has newly-released its findings on the incident, states that the controller communicated with the 717 crew in English, and the Hop crew in French, although it has not been able to ascertain whether the use of English throughout might have altered the outcome.

Situational awareness for the parties involved might have improved, it says, if the 717 crew had made radio contact while 4nm from landing, and the controller had communicated more effectively with the ERJ pilots with respect to understanding their position under the low-visibility conditions.