While the European airworthiness directive to modify the Boeing 737 Max for return-to-service are the same as those issued by the US FAA, some of the operational requirements will differ.

The European Union Aviation Safety Agency has invited comments on its proposed directive, which will enable operators of the twinjet to re-introduce it to passenger service after its grounding in March last year.

Although the required design updates will parallel those of the FAA – meaning European- and US-operated aircraft will have no software or technical differences – the EASA proposal features a couple of operational tweaks. 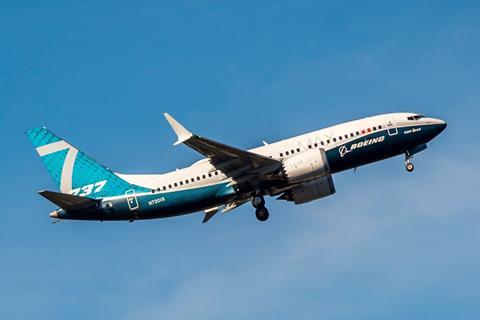 EASA will allow crews to disengage the stick-shaker, to prevent its distracting the pilots, if it has been erroneously activated.

The proposed EASA directive mentions installation of coloured caps on the stick-shaker circuit-breakers, but points out that the FAA directive issued on 20 November has no corresponding requirement.

Several pilot associations had expressed concern to the FAA over the “attention-getting” nature of the stick-shaker, and requested a change to procedures to enable suppression – by pulling the circuit-breaker – if the warning was erroneous.

But the FAA says the revised software for the 737 Max eliminates the potential for false angle-of-attack data to cause misbehavior of the MCAS flight-control system, and “therefore removes the most significant contributor to unacceptably high flightcrew workload”.

The FAA says it has assessed all remaining cockpit effects, including erroneous stick-shaker, across all foreseeable failure conditions.

“With the remaining flight deck effects and associated crew workload, these failures and effects were found compliant and safe,” it says, adding that – while an erroneous stick-shaker might be a distraction, it “does not affect controllability” of the aircraft.

It adds that the circuit-breaker locations for the stick-shaker do not meet FAA requirements for “convenient” operation of emergency controls from the pilots’ normal seating position – and that pulling circuit-breakers could, in itself, amount to a possible distraction.

The proposed EASA directive refers to the ‘airspeed unreliable’ procedure and states that a nuisance stick-shaker “may be de-activated at pilot’s discretion” on the affected side.

“This improves recognition of a stall warning on the opposite side,” it adds.

EASA’s directive also includes a temporary prohibition on conducting RNP-AR approaches with the aircraft – a type of precision approach which demands the capability to meet stricter navigation tolerances.

It says it has gathered evidence that, after a single angle-of-attack sensor failure during such approaches, all flight guidance allowing the pilot to guide the aircraft along the intended flight path “is lost”.

“Therefore the crew is left with no means to ensure that the [aircraft’s] trajectory can be maintained within the tolerated lateral deviation,” it adds. This could be a hazard if the RNP-AR approach has been developed to avoid terrain or obstacles.

EASA says it expects its prohibition to be a “short-term restriction”.

It states that its 737 Max pilot training requirements are “broadly the same” as those set out by the FAA, but points out that limited simulator capacity means the training could take “some time” to schedule.

“Some of this work can be started now, even in advance of the final airworthiness directive publication,” says EASA.

Boeing and EASA are to work on increasing further the robustness and resilience of the 737 Max to angle-of-attack sensor failure.

While the Max has two angle-of-attack sensors, the FAA considered remarks that three such inputs – possibly including one from synthetic data – should be required in order to resolve a situation in which a single sensor generated spurious data.

But the FAA insists that the aircraft’s software revision, which uses comparison of two angle-of-attack inputs, will disable the MCAS if necessary and enable the aircraft to continue flying safely and land with MCAS inoperative.

“The new MCAS design accounts for safe operation after [angle-of-attack] sensor failures due to environmental causes including bird-strikes that bend or break the vane,” it adds.

EASA says Boeing is to carry out a human factors assessment of its crew-alerting systems over the next 12 months, with a view to potentially upgrading them to a more modern design.