Hydraulics and locks scrutinised after 757 freight door opens during climb

Three occupants – the captain, first officer and a non-company jump-seat pilot – were on board the UK-registered aircraft (G-DHKZ) which was bound for Frankfurt on 13 February this year.

After the door opened at about 5,100ft, the crew stopped the climb and opted to return to the departure runway, but to land in the opposite 08R direction.

Although the crew experienced control difficulties with the autopilot engaged, and the captain took manual control, the aircraft landed safely some 14min after the incident.

The aircraft, originally delivered to Inter European Airways in 1992, underwent conversion to a freighter in 2011. 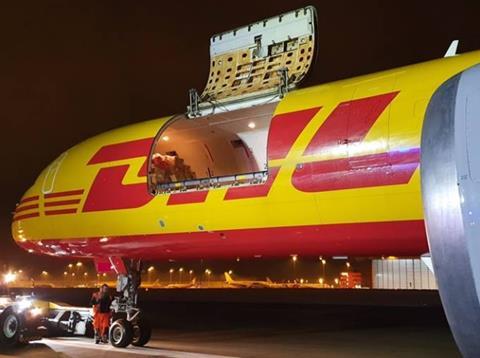 As the DHL Air aircraft climbed through 5,100ft the main cargo door opened

Both are still being examined as part of two scenarios under consideration by the inquiry. But BFU says the electrical circuit inspection has “not revealed any irregularities”.

Closure of the door involves hydraulic pressure being applied to the lift cylinders to lower the door, until it is flush with the fuselage. As the hydraulic pressure increases, latches are driven into the spools. Then a further increase in pressure moves lock pins into drill-holes, locking the door.

Indicator warning lights on the door control panel extinguish at each stage of the closing, latching and locking.

While the inquiry has not reached any conclusions about the cause of the event, it has made a number of observations about the door’s hydraulic system – including a leak in a hydraulic line – and the latching mechanism.

It has not clarified whether any anomalies found in the door’s mechanical systems are the result of damage incurred as the door opened in the slipstream while the 757 was travelling at 240kt.

But it says hinges on the lift mechanism were distorted, the inner lining of the door was missing, and there was damage to wiring harnesses.

Examination of the locking system, situated on the lower edge of the door, revealed that lock pins did not reach their final position through drill-holes in the latches.

“During a later examination, the status of the latches…was reconstructed and revealed that the door could be pushed open manually,” it adds. “The latches slid across the latch spools on the floor. The upper surface of the spools showed scratch marks.”

Attempts to operate the locking mechanism manually using the hydraulic system’s hand pump revealed an “error in its motion sequence”, says the inquiry. Investigators have been unable to rule out the possible presence of air in the system before the hydraulic leak.

Surveillance video of the aircraft shows the previous crew opened the door about 85% of the way after it parked on arrival.

All the cargo loaded on the aircraft remained on board during these opening-closing sequences.

After a new crew boarded, a little more than 40min later, the door was fully opened once more to unload the cargo. A new shipment was then loaded and an individual, identified as the captain, appeared at the crew door and closed the cargo door in a single movement.

“The [captain] stated he was the one closing the cargo door completely, so that all control indications at the [door] control panel had gone out and the cargo door was flush with the fuselage,” says the inquiry.

“According to the statement of both [pilots], in the cockpit the cargo door warning light had also gone out.”

As part of the investigation BFU is examining a similar incident, involving a Yakutia Boeing 757-200 (VQ-BPY), which occurred in December 2014 as the aircraft climbed out of Magadan. After the main cargo door opened completely, the crew returned to the departure airport and landed without further incident.