Russian investigators are focusing on icing in relation to the dual-engine failure which resulted in a PZL-Mielec An-28’s having to make an emergency landing in a swampy field, where it flipped over and suffered extensive damage.

Federal air transport regulator Rosaviatsia states that accident occurred shortly after the An-28, operated by SiLA, departed Kedrovy for its service to Tomsk on 16 July.

Weather forecasts for low-altitude flight pointed to freezing conditions at altitudes of 2,500-3,000m.

Rosaviatsia says both Omsk TVD-10 engines failed in the climb and it carried out a “forced landing” in a swampy region some 60km from Kedrovy. The aircraft came to rest inverted and badly damaged but all 18 occupants survived. 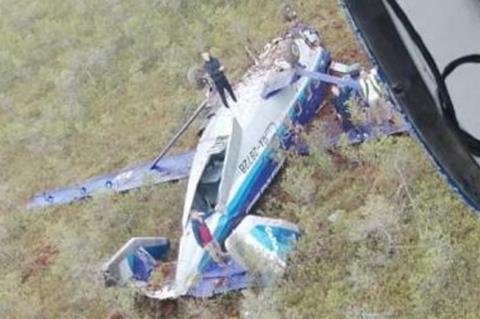 After the forced landing, the An-28 flipped over

While the investigation into the accident is continuing, Rosaviatsia is recommending that pilots be given additional awareness training on operating procedures for anti-icing systems – before and during flight – and actions if icing alarms are triggered or the crew observes signs of icing.

It also says An-28 operators should carry out a one-time check of the anti-icing systems on the type.

Rosaviatsia says it has recorded seven events, including one accident and three serious occurrences, involving An-28s suffering engine failure during icing in the three decades since 1991.

Incorrect or badly-timed activation of anti-icing systems, it says, was often found to be a contributing factor in such events, both on An-28s and other types.

“Unlike aircraft ground icing, which is more typical for the autumn-winter period of operation, icing of aircraft in flight can occur at any time of the year when flying in conditions of increased humidity – both at negative and small positive external temperatures,” says Rosaviatsia.