US investigators probing a CommutAir Embraer ERJ-145’s offset approach path, before it suffered a runway excursion at Presque Isle, have disclosed that a second aircraft had encountered an offset to the same airport just two days earlier.

While no-one was seriously injured in the 4 March 2019 accident, the aircraft (N14171) was substantially damaged after it touched down in snowy conditions following United Express’s UA4933 service from Newark.

Presque Isle has no control tower and crews contact local ground services before landing to check runway clearance and lighting.

Given the weather conditions there was limited visibility. The first officer was flying the ILS approach to runway 01, and the aircraft’s instruments indicated no deviations from the correct localiser and glideslope course.

But according to pilot interviews released by the National Transportation Safety Board, the crew executed a go-around at about 100ft over concerns that the jet was too close to a tower structure at the airport. It vectored for a second attempt to the same runway. 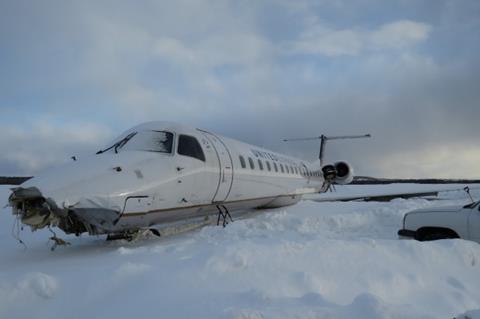 Radar data shows that, during both approaches, the aircraft’s track had been offset to the right, so that the ERJ was aligned between the runway and a parallel taxiway located 630ft to the right.

The captain stated that she saw the tower again on the second approach and, according to the cockpit-voice recorder, called “runway in sight” just after the ground-proximity warning system announced arrival at the 200ft decision altitude.

Having been focusing on the localiser and glideslope indications, the first officer stated that he was “staying on the flight director [because] I don’t see it yet”. He subsequently told investigators that he saw a white-on-white view, with blowing snow, and the aircraft touched down on the snow between the runway and taxiway.

While the inquiry has yet to reach conclusions, the NTSB has released a narrative from another pilot who operated the same United Express route, as flight UA4939, on 2 March, two days before the accident.

The narrative states that aircraft was cleared for the ILS approach to runway 01, and intercepted the localiser and glideslope.

But after breaking out of cloud at about 2,500ft, the pilot noticed the runway was left of the aircraft’s position “despite the localiser and glideslope indications being centred”.

Once visual contact was established with the runway and the aircraft aligned on the correct course, the pilot saw that the localiser indicator in the cockpit was deflected, and that this deflection was constant until touchdown. The crew contacted Boston air traffic controllers to notify them of the anomaly. 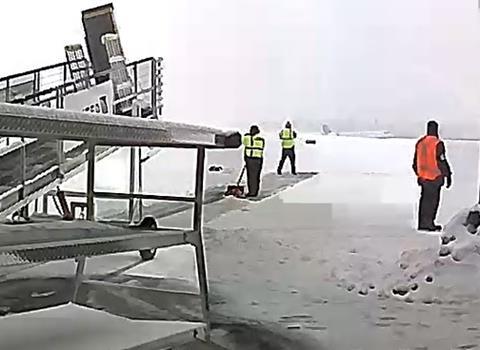 Surveillance video captured the moment the aircraft came to a halt

NTSB files also indicate that another flight, on 1 March, encountered a similar offset during a night arrival in visual conditions – the captain attributed this to unfamiliarity with the airport approach.

A message circulated by the US FAA three days after the accident stated that the airport had experienced “rapid and large snowfalls” prior to the event. Some 1.5m of snow was situated between the runway 01 threshold and the localiser array, with a snow pack extending for 1,000ft, it added: “Finding an acceptable area to dump the cleared snow is a challenge for the airport authority.” 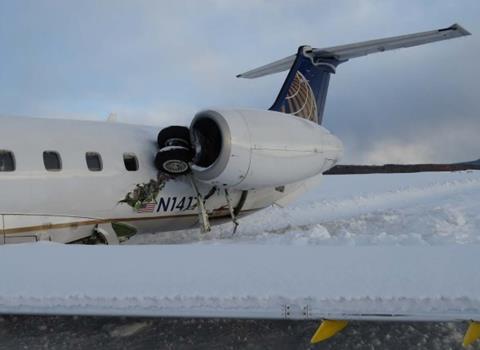 Flight inspection tests of the ILS were requested prior to any snow being removed, and measurements determined that the localiser course had shifted to the right.

CommutAir, which operated the regional service on United Airlines’ behalf, took several procedural and training steps to improve safety after the accident.

These included incorporating the scenario of an erroneous localiser signal into the simulator work, emphasising the use of cockpit instruments to verify position independently of ground-based navaids, and ensuring that both pilots confirm visual acquisition of the runway before continuing descent below decision height.