Investigators have given greater insight into the initial altitude deviation by a descending Boeing 747-400 freighter which preceded the aircraft’s capturing a false glideslope and fatally crashing at Bishkek.

The inquiry into the accident, at night on 16 January 2017, had already established that the aircraft had been too high on its approach, leaving it susceptible to encountering the false glideslope.

But it had not explained why the ACT Airlines aircraft had remained so high after leaving its cruise altitude and commencing its descent towards the Kyrgyz capital.

The aircraft had been maintaining 18,000ft over the waypoint RAXAT, and was cleared to descend to 6,000ft to cross TOPKA.

These two waypoints were just 27nm apart and the airline’s standard descent procedure would only have enabled the 747 to lose 9,000ft rather than the required 12,000ft in such a short distance.

“They left us high again,” the captain remarked, one of several comments indicating the crew had been hoping for earlier clearances to a lower altitude.

The aircraft was operating in ‘flight level change’ mode and the crew selected 6,000ft with an airspeed of 262kt.

Despite the requirement for a more aggressive loss of altitude, the inquiry says the initial descent was conducted without the use of speedbrakes, and with increasing airspeed – the airspeed was adjusted to 270kt, then to 280kt, and again to 290kt as the aircraft passed through cloud at 16,000ft.

Some 1min 40s into the descent the crew changed to ‘vertical speed’ mode and increased the descent rate to 2,400ft/min. The airspeed continued to rise, reaching a maximum of 317kt.

Speedbrakes were deployed manually at 12,200ft – initially to 30° and then to 36° – and the ‘flight level change’ mode was re-engaged. The aircraft continued to descend but reached only 9,200ft by the time it passed TOPKA. It was also travelling at 270kt, above the 250kt limit dictated by ACT for flight below 10,000ft.

“The chart requirements [for passing TOPKA] were not formally violated,” says the inquiry. “But the aircraft was too high for continuing the approach in accordance with the chart without additional manoeuvring for decreasing the altitude.” 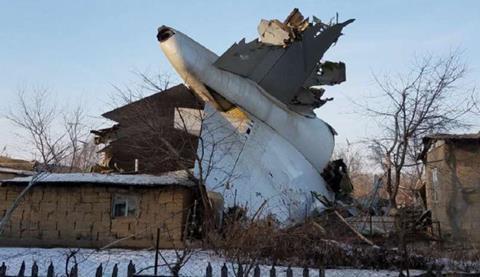 Investigators sought further analysis of the aircraft’s flightpath from an airline operating 747s, concluding that – given the short distance in which to lose altitude – the absence of speedbrake deployment at the beginning of the descent was “incorrect”.

To descend from 18,000ft at RAXAT and reach 6,000ft by TOPKA the speedbrakes should have been extended from the outset, the inquiry says, and the “significant increase” in airspeed “should have been prevented”.

It adds that the crew also ought to have extended the landing-gear some 5-8nm before TOPKA, and deployed 5° of flap while keeping the speedbrakes extended, and reduced airspeed to 210kt in order to achieve a steeper descent.

The aircraft remained above the approach profile as it neared Bishkek and inadvertently captured a false 9° glideslope from the ILS to runway 26.

Owing to the 747’s excessive altitude, it automatically followed a descent path that took it over the airport and it landed beyond the runway in a residential area, resulting in the loss of all four crew members as well as 35 fatalities on the ground.