Investigators have found incorrectly-sized components on the landing-gear assembly of an Icelandair Boeing 757-200 which suffered a main landing-gear collapse at Reykjavik earlier this year.

Examination of the 757 showed that the side strut of the landing gear had detached from the shock strut. The two are connected by a swivel.

RNSA says threads in the swivel twice underwent undersizing, during maintenance work in 2008 and 2019.

This reduction in the diameter of the swivel threads was permitted but required a special undersized nut to be manufactured.

Investigators’ initial measurements, however, showed the nut from the landing-gear was “too large” for the undersized swivel threads, says RNSA. 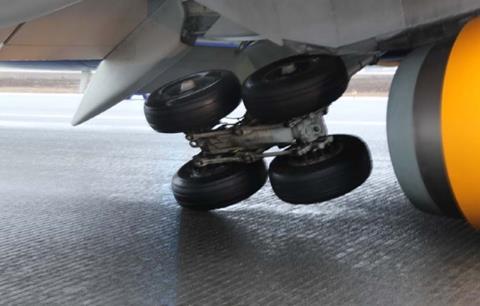 Flight FI529, operated by the 20-year old TF-FIA, had been arriving from Berlin on 7 February.

Cockpit-voice recordings show the crew was “not aware of any problems” before the landing, and flight-data recorder information revealed no abnormal loading during touchdown.

The flare was normal and the jet initially touched down on its right, then left, main landing-gear. But as the nose was de-rotating an “abnormal sound” was heard and the jet listed to the right, its right-hand engine striking the runway before the nose-gear made contact.

Investigators found that the swivel nut and an associated washer were missing from the immediate scene, and were located near the aircraft’s touchdown point. A locking bolt for the nut was also found to have sheared.

Full analysis work on the swivel and nut has been delayed by US travel restrictions imposed as a result of the coronavirus outbreak, but RNSA has made interim safety recommendations to Icelandair and its associate operator Cabo Verde Airlines regarding landing-gear checks. Landing Gear Technologies has yet to comment on RNSA’s preliminary findings.