The twinjet (F-GSQJ) had been arriving from New York JFK on 5 April, and had been aligned for approach to runway 26L.

French investigation authority BEA states that the “serious” incident involved control difficulty and “instability” during the approach, a go-around, and the aircraft underwent “oscillations” in its flightpath.

Both the cockpit-voice and flight-data recorders have been retrieved and are undergoing analysis. 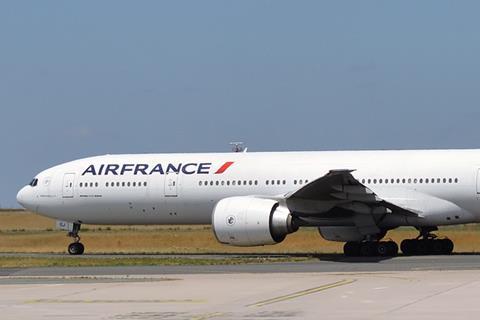 This Air France 777-300ER, registered F-GSQJ, was the jet involved in the incident

Air-ground radio communications indicate that, at the time of the incident, the tower controller was speaking with a crew member experiencing a degree of heightened stress and effort with alarms audible in the cockpit. The recordings were archived by LiveATC.

BEA has yet to clarify the nature of the alarms. The communications mention a go-around and the aircraft – having descended to about 1,000ft – subsequently climbed and repositioned for an approach to runway 27R some 25min later.

The aircraft had flown several transatlantic services in the days prior to the event.

Air France took delivery of the twinjet, powered by General Electric GE90 engines, in 2005 and has since been the airframe’s sole operator.