US investigators are trying to understand why a lightly-loaded Boeing MD-87 failed to become airborne on a Houston runway, and was unable to stop before overrunning.

The privately-operated aircraft came to rest some 500m beyond the far end of runway 36 at Houston Executive airport on 19 October, having crossed a road and spun to the left as it travelled over rough ground.

All 21 occupants survived the accident but the MD-87 was consumed by fire.

While tyre marks indicate the aircraft was still on the ground as it travelled off the runway end, investigators have yet to confirm whether the crew rejected the take-off.

Video images from the scene indicate that the thrust-reversers on the Pratt & Whitney JT8D engines were in their stowed position at the time the aircraft came to a halt.

Weather conditions at the time were good. Houston Executive airport’s runway has a length of 6,610ft which should have been sufficient for the departure. The inquiry is likely to examine take-off performance calculation data was correct.

US TV network ABC has carried video footage – not independently authenticated by FlightGlobal – purporting to show the beginning of the take-off roll, which appears to show a brief jet of pale smoke apparently emerging from the rear of the left-hand engine.

The origin of this smoke and any relevance to the event have not been determined. Images from the scene seem to suggest blast damage to the grass behind the right-hand engine but none behind the left, but the debris field also indicates that the left wing, and its fuel tanks, were destroyed by tree collisions as the jet careered across the ground. 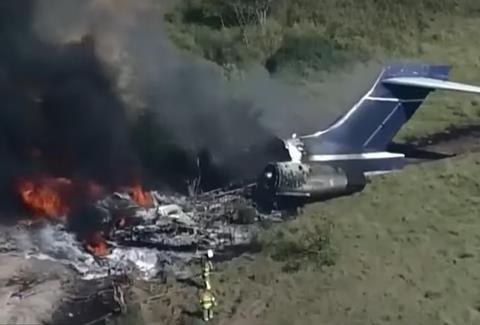 Take-off calculations normally include determination of the ‘V1’ speed beyond which the crew commits to flight in the event of an engine failure. Engine failure below this speed would normally result in an aborted take-off and a halt on the runway.

US investigators probing an Ameristar MD-83 take-off overrun at Willow Run airport in March 2017 found the crew attempted to abort after reaching V1, because the aircraft failed to rotate on command.

The inquiry found that one of the aircraft’s elevators had jammed because it was subjected to rapid oscillations caused by localised air turbulence in the area the jet had been parked – even though surface gusts did not exceed design limits. The elevators did not have gust locks and the crew was not able to detect the jammed surface before flight.

Fire destroyed the wings and the fuselage of the MD-87 involved in the Houston accident, and the flap and slat settings have yet to be confirmed by the US National Transportation Safety Board.

The fatal Spanair MD-82 departure overrun accident at Madrid in August 2008 was traced to the aircraft’s flaps not having been deployed by the crew, and the malfunction of a configuration alarm.

Failure to set the flaps of an Austrian-operated MD-83, operating out of Lanzarote a little more than a year, resulted in the aircraft’s experiencing excessive rolls after it became airborne, although it managed to return to the airport to land.