Iranian investigators have disclosed that the captain of a landing Iran Air ATR 72-600 intervened to reduce descent rate during the flare, resulting in dual control inputs, but could not avert a hard touchdown.

In the moments before the initial touchdown the aircraft was probably subjected to a downdraft, says the Iranian Civil Aviation Organisation. Attempts to slow the descent resulted in a sharp nose-up pitch and a tail-strike as the ATR landed.

Its inquiry found the aircraft – with a trainee first officer, with 22h on type, flying – had not achieved stable approach criteria at 500ft during the approach to Tehran Mehrabad on 26 August last year.

At this point it was still 20kt above the selected target airspeed of 110kt. The aircraft was flown manually and the first officer maintained a nose-up input on the control column, indicating the aircraft was trimmed nose-down.

It had decelerated to 112kt by 150ft, bringing it within the stabilisation criteria, with a descent rate of 700ft/min, further reducing to 300ft/min at 100ft.

But flight-data recorder information shows that, at 75ft, the back-pressure on the control column was eased and the aircraft’s pitch declined from 2° nose-up to 0.5° nose down, causing the aircraft’s descent rate to increase. 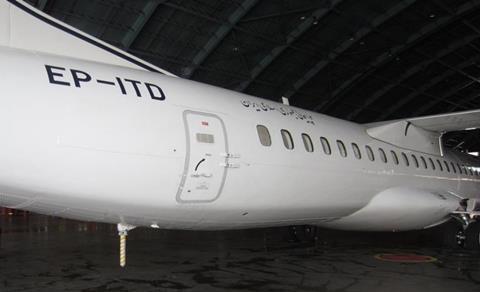 Investigators believe the aircraft encountered a downdraft just before touchdown

While nose-up input was progressively applied as the ATR flared at 30ft, says the inquiry, the aircraft “probably” experienced a downdraft close to the ground. Wind conditions had been varying between headwinds and tailwinds during the approach.

“The nose up input was not sufficient to counter this downdraft acceleration,” it says. The descent rate increased to 900ft/min at 15ft and the flight-data recorder registered dual control-column input as the captain intervened.

“The captain sensed that the rate of descent did not decrease,” says the inquiry. Although the captain subsequently testified that he had called “I have control”, both pilots were applying input and the aircraft pitched sharply, at a rate of 13°/s, to 6.7° nose-up.

The inputs could not arrest the descent sufficiently to prevent a hard 3.1g impact and the nose-up attitude resulted in the aircraft’s striking its tail on runway 29L.

At the point of touchdown the dual input continued, but in opposite directions – the captain commanding nose-down, the first officer nose-up.

Investigators state that the ATR underwent four main landing-gear compression cycles as it settled, but could not determine whether the wheels remained in contact with the runway. 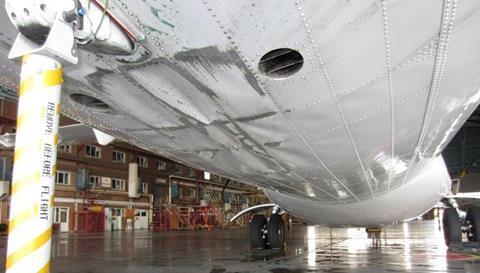 The aft fuselage underside suffered multiple bent and detached frames and stringers, while the skin was substantially damaged.

Sixty-three passengers were on board the flight from Rasht, and the occupants disembarked normally. The inquiry says one passenger notified the accident investigation board of the event, and that it was confirmed by the carrier.

Its crew of eight included the examining captain alongside the newly-hired first officer, who was undergoing training, as well as a safety pilot. The aircraft (EP-ITD) had been delivered new to the carrier about two years earlier, in May 2017.