Iranian investigators are probing the serious uncontained failure of a Fokker 100 engine which forced the crew to abort take-off from Tehran’s Mehrabad airport.

The Iran Aseman Airlines jet (EP-ATE) had been operating a service to Ardabil, near the Caspian Sea coast in north-western Iran, on 13 October.

Preliminary investigation by the Iranian Civil Aviation Organisation has determined that flight EP3962 left the gate at 14:45 and commenced its take-off roll from runway 29L.

Around 500m into the run, at an airspeed of 91kt, the right-hand Rolls-Royce Tay 650-15 engine sustained damage.

“Engine efficiency parameters immediately reduced,” says the inquiry. As the aircraft was still travelling below the V1 decision-speed threshold, the crew aborted the departure. 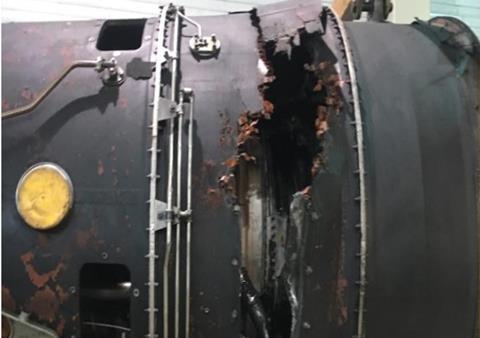 Investigators have revealed substantial damage to the Tay engine

Analysis of the engine showed that the failure in the area of the high-pressure turbine had caused turbine blades and other parts to be ejected from the engine, penetrating the nacelle. Some of these parts pierced and entered the fuselage.

“Despite the proximity of one of the flight attendants to the incident location inside the cabin, fortunately no injuries were inflicted [on anyone],” the inquiry states.

Flight recorders from the aircraft – which was transporting 87 passengers and seven crew members – were retrieved for assessment by the Civil Aviation Organisation.

The aircraft is listed by Cirium’s fleets data as a 1990 airframe originally delivered to the Swedish arm of Braathens in 1993.

Details of the engines’ usage and maintenance have not yet been disclosed by the inquiry.

But the Iranian investigators suggest there are similarities with the fatal accident involving a TAM Fokker 100 (PT-MRN) which suffered uncontained engine failure in flight on 15 September 2001.

The twinjet had been en route at 31,000ft from Recife to Campinas, and was 70nm from Belo Horizonte when the accident occurred, with the fan disc and the first three stages of the compressor separating.

High-energy parts penetrated the cabin, fatally injuring a passenger in window seat row 19, who was hit by fragments of a stator vane disc. Three other passengers were also struck.

Brazilian investigation authority CENIPA concluded that two to five fan blades had initially failed, and that the failure appeared related to fatigue induced by flutter.

It said examination of the blade roots and the profile of engine damage was similar, in turn, to that arising from two prior Tay events on 5 December 1995 and 29 August 1997.

The TAM inquiry posited that the routine use of maximum reverse-thrust during operations at Rio de Janeiro’s Santos Dumont airport might have resulted in exposure to engine thrust in a critical range, inducing fatigue cracks.

Iran’s Civil Aviation Organisation says “further investigations” on the engine are needed, and that – given the previous fatal accident – it is notifying Dutch, German and UK counterparts of the Iran Aseman event.