While reduced-thrust take-off is perceived as beneficial, extending engine life and lowering maintenance costs, the Dutch Safety Board says there is a risk of unexpectedly-long take-off runs if performance data is incorrectly calculated.

It says the 777-300ER incident, during take-off from Amsterdam Schiphol on 21 April 2017, is just one of several similar events to have occurred.

“The airline industry has made efforts on a global scale to improve the operational procedures to prevent incorrect take-off thrust settings,” it states. “However, these efforts have not resulted in a significant reduction of the risk and incidents.”

Changing the input data for take-off performance – particularly at the last minute – might only result in a “marginal” cost-reduction benefit, but introduce a risk of error, says the Dutch Safety Board.

“Currently, there is insufficient insight in the relation between the actual cost reduction on one hand and the increase in safety risk with respect to erroneous data entry on the other,” it adds.

“[We are] of the opinion that operators need to consider the benefits of reduced thrust take-offs against the possible safety risks.”

The inquiry is recommending that IATA develops a standard policy for airlines with regard to reduced-thrust take-off procedures, including a risk analysis of the trade-off between cost and potential risk. 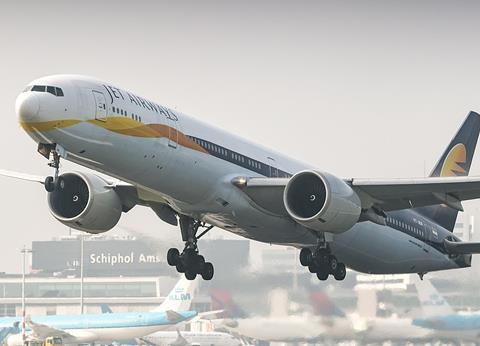 One of Jet Airways’ 777-300ERs lifting off from Schiphol

Bound for Toronto, the 777 attempted to depart with insufficient engine thrust, after an incorrect weight was entered into the electronic flightbag. It sustained a tail-strike as it lifted off and subsequently returned to the airport.

Dutch Safety Board investigators determined that a final loadsheet had been calculated by the airline’s centralised load-control unit in India, on the assumption that all planned passengers had boarded.

But after the loadsheet was received by the ground crew – showing a take-off weight of 299,175kg – one passenger was found not to have shown up for the flight.

Under pressure to ensure a punctual departure, the load controller amended the loadsheet manually, intending to subtract 100kg from the take-off weight to account for the missing passenger.

Time pressure experienced by the ground crew was also being felt by the pilots, who had not pre-entered estimated weights from a preliminary loadsheet into the aircraft’s systems.

“The captain was distracted several times in his flight preparation flow,” says the inquiry. “He stated that he was experiencing pressure and reached his saturation level.

“This created a situation in which the flight preparation process and the co-ordination between both pilots became less effective and vulnerable to error.”

To program the flightbag and flight-management system the airline required the captain to read out the necessary information, while the first officer entered the data.

Neither pilot noticed the difference between the incorrect weight, read by the captain, and the gross take-off weight, from monitoring data, displayed on the flight-management system.

The inquiry points out that Boeing’s manuals state that each pilot should independently calculate take-off performance. This allows gross errors to be detected during subsequent comparison.

If the captain tells the first officer the weight to use, the inquiry says, the calculation “can no longer be classified as an independent process”, meaning the error-check opportunity is “lost”.

When the take-off reference speeds, calculated on the electronic flightbag, were entered into the flight-management system, they were off by 10-12kt. This difference also went unnoticed.

As the aircraft reached rotation speed on runway 18C the captain applied back-pressure to the control column, but remarked that the jet was “sloppy” and not behaving as expected. He limited the pitch but did not select additional thrust.

The first officer stated that he had felt a slight pitch hesitation and bump during rotation, and the inquiry found the aircraft had over-rotated and that the tail skid had struck the runway.

After being informed of a possible tail-strike by the departure controller, the crew opted to return to the airport. The aircraft (VT-JEW) was not damaged, although the tail skid was slightly scraped, and none of the 358 occupants was injured.