The irregularity on runway 06 induced a sudden vertical load into the nose-gear, which had an overextended shock-absorber that reduced its ability to cushion the impact, says the Air Accidents Investigation Branch.

As a result the jolt transmitted increased forces into the airframe and avionics rack housing the air-data inertial reference units.

After climbing out of Edinburgh, the crew levelled the aircraft at 35,000ft after the autopilot and autothrust disconnected and the flight-director display disappeared.

Several messages were displayed on the electronic centralised aircraft monitor and the flight-mode annunciator was blank, and the pilots became concerned that – with the autopilot off – the A319 was not able to comply with reduced vertical separation minima. But the crew was able to restore autopilot and autothrust operation after about 5min of manual flight. 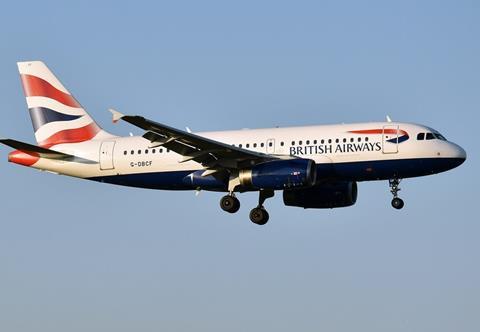 The pilots carried out a diagnosis and noticed abnormal inertial reference system positions, which would normally give three readings with a difference of less than 1nm between them. Although they considered re-aligning the system, they felt this might exacerbate the situation and instead opted to continue to Heathrow.

As the A319 descended through 4,000ft for runway 27R, the autopilot and autothrust disconnected again, and the crew discontinued the approach, rebriefing for a manually-flown approach with raw data and landing without further incident.

Investigation showed that all the events occurred with aircraft on which a specific Northrop Grumman air-data inertial reference unit had been installed. The inquiry says 1,459 aircraft in service – around 14% of the A320 fleet – had the units fitted, but that none had been installed on new aircraft since 2015. 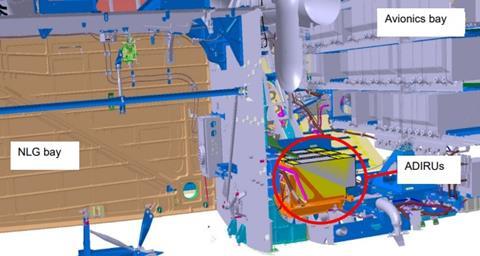 Analysis using accelerometers on the nose-gear of several aircraft showed the inertial reference system drift was induced by abnormal levels of vibration or shock transmitted during the take-off roll and rotation.

This was likely to have been the result of several factors, including loads imparted by the runway surface and incorrect servicing of the nose-gear shock-absorber – that of the A319 at Edinburgh was over-extended by 15mm (0.6in).

Severe inertial reference system drift from the Northrop Grumman equipment was the subject of a technical notice to operators in April 2020. The inquiry says the system was “sensitive” to vertical forces outside of their qualification envelope.

Investigators point out that the crew “successfully managed” the situation, by applying the ‘aviate, navigate, communicate’ principle. Edinburgh airport’s operator subsequently located a “slightly uneven” repair patch on the runway, which it replaced.