Swiss investigators have concluded, in a damning inquiry, that a Junkers Ju 52 on a pleasure flight stalled after the crew flew it into a narrow valley at low altitude, at a dangerously low airspeed and with its centre-of-gravity out of limits.

The crew intended to exit the valley via a pass and there was “no possibility” of an alternative flightpath, says the inquiry. Vulnerable to updraughts and downdraughts from turbulence in the area, the aircraft stalled as it entered a turn, from which it had no margin to recover.

None of the 20 occupants survived the accident after the aircraft entered an Alps valley basin near Piz Segnas. It performed a left turn which developed into a downward spiral and the three-engined aircraft dived into the ground.

“The flight crew was accustomed to not complying with recognised rules for safe flight operations and taking high risks,” says Swiss investigation authority SUST, in its analysis of the 4 August 2018 accident.

SUST says the operator, Ju-Air, failed to identify or prevent “frequent violation of rules” by its crews, adding that “numerous” incidents, several of them serious, were “not reported” to authorities.

The inquiry’s reconstruction of the accident showed that the centre-of-gravity was 2.07m behind the wing’s leading edge at the time.

SUST says this means the aircraft was operating with its aft centre-of-gravity beyond the limit of 2.06m determined by the manufacturer.

“This situation facilitated the loss of control,” it states. 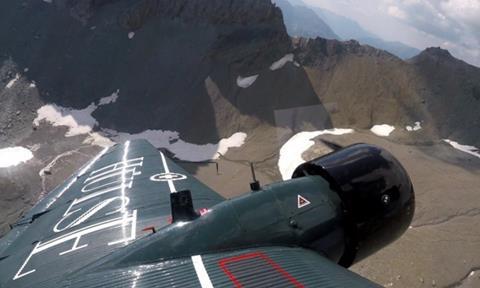 Photo taken from inside the Ju 52 as it started to roll left into the fatal dive. Investigators used photos and video to reconstruct the aircraft’s attitude in the absence of flight-data recorder information.

Investigators found the centre-of-gravity calculation was part of the flightplan preparation, but says it was “incomplete” and “compromised” by systemic errors before the aircraft took off from Dubendorf on 3 August, on the first part of a two-day flight tour.

The calculation had determined a centre-of-gravity 1.99m behind the leading edge, based on a take-off weight of 9,965kg. But SUST’s reconstruction put the weight at 9,714kg and the centre-of-gravity at almost 2.1m.

As the aircraft flew from Dubendorf to Locarno it navigated past the Ritzlihorn mountain just 30-50m from the rock face, and continued in close proximity to other parts of the terrain while travelling through the Cristallina region. 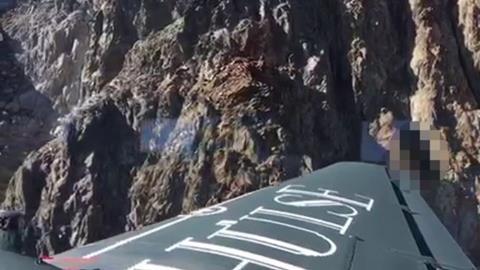 The next day one of the aircraft’s two pilots separately travelled back to Dubendorf to conduct three out-and-back sightseeing flights on a sister Ju 52. On all three flights, says SUST, the crews involved piloted the aircraft “significantly” below the 1,000ft safety margin in high-terrain areas, on several occasions, and “disregarded essential principles” for safe mountain flying.

Reuniting at Locarno the two pilots prepared to take the original Ju 52 back to Dubendorf. But the aircraft balance was again miscalculated, with the centre-of-gravity assumed to be 1.98m aft of the leading edge when SUST believes it was closer to 2.08m.

No flight recorders were installed in the Ju 52 but SUST has used photogrammetry techniques to rebuild and examine its flightpath and attitude in the final moments before the accident.

As part of the flight to Dubendorf the aircraft entered and flew north-north-east along the centre of a valley basin, approaching the Piz Segnas peak, with mountainous ridges rising to 2,800m and more on either side.

Images and video capture inside the aircraft after it entered the valley showed “no evidence” of anyone moving around inside the cabin, or not sitting in their seat, during the time leading up to the accident, says SUST.

As the Ju 52 progressed through the valley it gradually descended to around 2,766m altitude and the crew initiated a right turn before making a left turn. At this point the aircraft was travelling at a groundspeed of about 92kt.

The inquiry believes the aircraft had been descending through a downdraught, and that this rapidly changed to an updraught around the time of the turn, fatally affecting the angle-of-attack and the lift over the wing. The Ju 52 did not have enough speed margin to restore the airflow.

SUST found that, during the right turn, the difference between the pitch and the descending flightpath angle increased to about 15°. As the aircraft transitioned into the left turn its pitch reached about 11° while the flightpath angle of its descent was about 10°.

Its roll to the left steadily increased and did not decrease even during a “significant” aileron deflection to the right, says SUST. The Ju 52’s flightpath became increasingly steeper downwards and the left bank continued to increase.

At 108m above ground the Ju 52’s longitudinal axis was 68° below the horizontal, with its elevator deflected upwards and the rudder pointing to the right, and the aircraft’s roll accelerated into a spiral dive until it collided almost vertically with the ground at some 108kt. 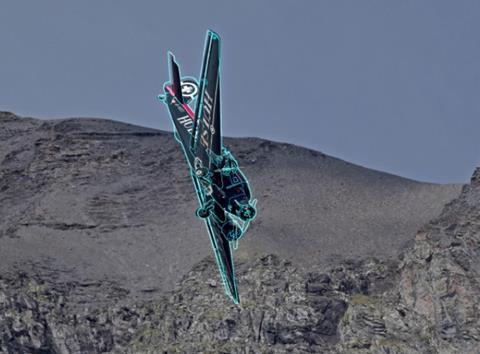 The inquiry found that the two pilots had flown a sister aircraft on a similar route through the basin on 6 July 2013, eventually exiting by flying over a ridge of the Segnes pass at just 30m above ground.

Comparison of its trajectory with that calculated from the accident indicates that a 180° turn, or an alternative flightpath, in the northern end of the valley basin “would not have been possible” for this earlier flight.

SUST obtained radar data for 216 flights by Ju-Air on its Ju 52 fleet from April 2018 to the date of the crash, to analyse them with respect to the mountain operations, paying particular attention to specific issues such as low-level flying over ridges, flight phases with no possibility of turning back, and approaches to terrain significantly below recommended safety margins.

“It became apparent that, in approximately one-third of the flights analysed, elementary principles of safe flight management in mountainous areas were significantly violated,” says SUST.

Nearly 17% of the flights involved situations with “very high” risk potential, it adds. Sixteen of the 27 Ju-Air pilots had been trained in the air force and, while not all the company’s pilots were violating basic safety rules, the violations mainly involved those with an air force background.

Swiss investigators explain the lead-up to the Ju 52 accident