Investigators have disclosed that a serious take-off miscalculation incident, involving a KLM Boeing 737-800 at Lisbon, went unnoticed at the time and was only flagged weeks later by routine flight-data monitoring.

The aircraft, bound for Amsterdam on 3 March, departed from the U5 intersection of Lisbon’s runway 21 – with an available take-off run of 2,410m – using performance data calculated for a full-length 3,805m runway.

This meant the take-off power and speed calculations were based on a runway distance more than 50% longer than that available to the crew. The jet lifted off with just 284m of runway remaining, crossing the opposite threshold at 45-70ft.

Portuguese investigation authority GPIAAF says the crew “did not notice any anomaly” during the departure and therefore did not highlight the event.

“Current experience suggests that mistakes such as the ones described relating to this serious incident, where no consequences occurred, often go unreported,” it states. 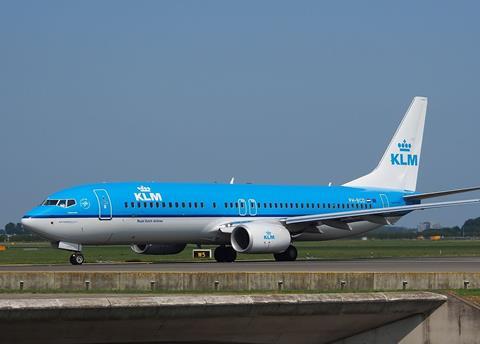 KLM’s Boeing 737-800 PH-BCD, seen at Amsterdam, was involved in the Lisbon incident

GPIAAF says it started evaluating the event on 29 April.

It found that the crew, using the aircraft’s on-board Lido tool, had initially selected intersection S1 as the take-off point for the performance calculation.

But this was not a valid entry. The inquiry found that the crew then requested data for intersection ‘S’, which the tool assumed to be ‘Position S’ – which, in the airport’s designations, equated to intersection S4.

Intersection S4 is located at the beginning of runway 21, meaning the take-off calculation was based on a full-length availability.

The aircraft was cleared to depart from the U5 intersection. This would have given it an additional runway length margin of about 300m – and a performance advantage – compared with the originally-selected S1 intersection.

While the crew “did not notice” any issue with the aircraft’s performance after the inadvertent full-length runway calculation, GPIAAF says the reduced distance available might have posed an “unacceptable risk” in the event of an engine failure.

“Despite the lack of obstacles on the runway 21 clearway, the nature of the involving terrain, with the urban density in the climb-out path, is a serious concern that – in the event of an engine failure that occurs at a critical moment during the take-off – may lead to serious consequences,” it states.

The inquiry is recommending that crews and operators should report any such miscalculation event to ensure that lessons are shared with others.

GPIAAF says the carrier has updated its take-off performance tool, changing certain Lisbon designators to avoid a repeat of the data-entry error, and adds that a new tool is to be introduced which includes a clearer illustration of the intersections on which calculations are based.

Confusion over the intersection and position nomenclature used at Lisbon has been cited in previous similar incidents, and the inquiry says the airport operator is planning to publish changes in August this year.