Pilots of a SmartLynx Airbus A321 conducted a low approach to London Stansted because its crew had not realised that a revised arrival procedure, with a displaced threshold, was in place.

The aircraft had been approaching runway 22 at night on 22 July last year.

Repair work had been taking place at the threshold and the ILS for the runway was unavailable, says the UK Air Accidents Investigation Branch.

As a result a displaced threshold – shifted by some 800m – was in place and a steeper revised area navigation approach, designated RNAV22C, had been devised.

Cirium fleets data indicates the A321 (YL-LCQ) had been operating for Thomas Cook Airlines at the time.

The inquiry says the pilots “had not realised” that the approach had been amended and flew “lower than expected” over the works area, touching down close to the displaced threshold. 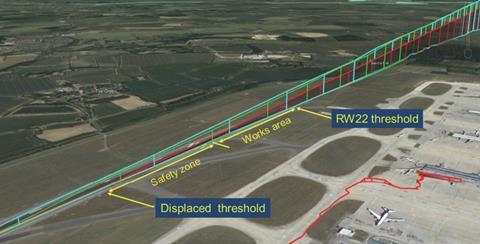 Temporary approach plates were available to the pilots in their electronic flightbags, says the inquiry, but the stated work in progress active periods on the temporary airfield chart were incorrect.

The work was being carried out at night to minimise disruption to airport operations.

Air traffic controllers had made “repeated references” to the RVAV22C arrival while the A321 crew was on the terminal controller’s radio frequency.

But the pilots were unaware that they were supposed to follow the RNAV22C procedure and instead flew the standard RNAV arrival, anchored to the threshold of runway 22.

As the aircraft approached 4nm from touchdown the controller gave landing clearance, warning of the displaced threshold and instructing the crew not to fly below the precision-approach path indicator light signals – which had been set to a steeper approach, 3.5°, than the normal 3°.

But the airline reported, according to the inquiry, that their pilots had misinterpreted this instruction as meaning that they should not follow the PAPI lights.

Visibility at the time of the incident was good.

“The crew appeared to have exhibited a degree of confirmation bias,” says the inquiry. “They were expecting a standard RNAV arrival and did not perceive the cues directing them to fly the alternative procedure.”

It points out that, although the controller consistently referred to the approach as RNAV22C, the A321 pilots replied simply with “RNAV approach” in almost all their readbacks. It adds that the incident highlights the importance of correct and complete radio phraseology.

Investigators state that the chart manufacturer assessed the reasons for the incorrect representation of the works schedule on the temporary airfield chart, and took remedial action to prevent a recurrence.