Iranian investigators have found that a Mahan Air Airbus A310-300 crew mistakenly landed long and overran at Yerevan after failing to check which end of the landing runway was subject to a displaced threshold.

The A310, arriving from Tehran on 26 May last year, had been cleared for an ILS DME approach to runway 09.

Despite having access to NOTAMs, terminal information broadcasts, and other information, the Mahan Air crew believed the threshold displacement applied to runway 09.

Flight-data recorder information shows that, as the aircraft descended through 660ft above ground, the crew disengaged the autopilot and, at 180ft, deliberately deviated upwards from the glideslope.

This deviation was deliberate and intended to extend the distance for flare and touchdown to account for the imagined threshold displacement, says the Iranian Civil Aviation Organisation inquiry.

But the misunderstanding meant the aircraft landed just short of the end of the runway, marked by the displaced threshold for runway 27. 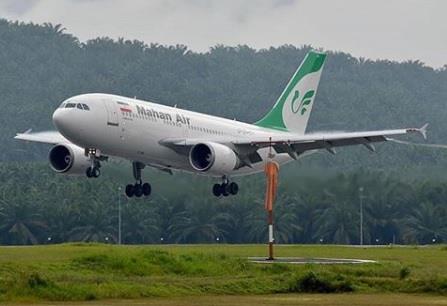 The captain observed lights marking the runway end and attempted full braking to avoid overrunning, but the jet crossed the boundary and received damage to its main landing-gear tyres as it passed over the lights.

After coming to a halt the crew notified tower controllers that they could not carry out the prior instruction to vacate the runway via taxiway B.

Investigators state that the crew had been given NOTAM data for Yerevan Zvartnots airport during a briefing and through delivery to the electronic flightbag in the cockpit, but the crew had “not enough time” to review the information.

Both pilots were experienced in flying to Yerevan but were preoccupied by matters including a flightpath adjustment for weather.

Although they reviewed the NOTAM data, the pilots were “not focused on the runway limitation”, says the inquiry, and a terminal information broadcast advising of the restriction similarly failed to register. The first officer also acknowledged an approach controller’s reminder of the threshold displacement as the A310 conducted its descent to runway 09.

None of those on board the aircraft (EP-MNV) was injured but the jet needed a tyre change before it could be released for the return flight to Tehran.