Portuguese maintenance firm OGMA has clashed with accident investigators over conclusions drawn from a serious Embraer 190 incident during which the aircraft departed with cross-rigged aileron cables, almost leading to the loss of the jet.

OGMA has strongly objected to several findings from investigation authority GPIAAF, arguing that the inquiry disproportionately assigns responsibility to the maintenance operation.

The Air Astana aircraft had taken off from Alverca do Ribatejo air base, bound for Minsk and Almaty, on 11 November 2018 after undergoing scheduled maintenance at OGMA’s facilities.

But the cross-rigging of the ailerons left the crew struggling to control the jet’s attitude, notably in the roll axis. Such was the severity of the situation that, at one point, the pilots sought to head for the sea in order to ditch, before they managed to regain a degree of control and eventually land. 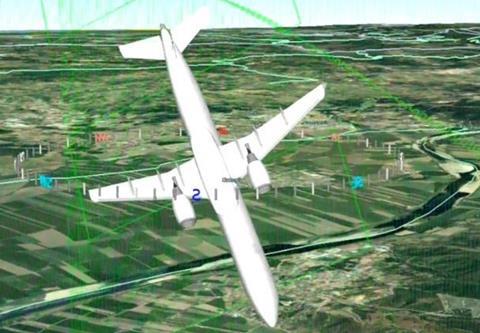 The inquiry determined the improper aileron cable installation to be the probable cause of the incident, identifying lack of an effective safety-management system and inadequate independent procedures to detect maintenance escapes.

As part of the maintenance work the E190’s aileron cables were disconnected, to be re-routed and replaced. But testing was delayed and personnel without relevant experience, who found the maintenance instructions difficult to follow, temporarily reconnected the cables.

Its inquiry mentions “weaknesses” in the aircraft’s design – which had allowed the cables to be inverted – plus flaws in the presentation of the cable routing in maintenance publications, and it points out that the crew had not detected the improper aileron functioning during pre-flight checks.

But the conclusions over the maintenance work have triggered a sharp and extensive response from OGMA, running to 14 pages, which recognises that its technicians failed to install the aileron cables properly but which also claims that it is being unjustly singled out.

“The message conveyed by the report to any average reader is that only OGMA was at fault and that no other parties had any real contribution for the incident,” it states. “That is inaccurate and incorrect and creates an unfair balance in the report.”

OGMA claims it has been “heavily criticised” throughout the inquiry for not having fully implemented a safety-management system, and defends itself by stating that it is “not legally required to do so” – noting that such a measure is still under a rulemaking process, and is not likely to enforce such implementation until around 2022-23 at the earliest.

But it adds that it has “already started” implementing a safety-management system, ahead of any legal obligation, for which it says it “should be praised”.

“Not being a legal requirement OGMA’s [safety-management system] should not be a focus of the report and cannot be deemed to have had any impact whatsoever on the incident,” it says.

OGMA has particularly brought up the fact that the aircraft’s crew missed the opportunity to detect the maintenance blunder through the routine pre-flight control check.

It argues that a maintenance release to service is “not a certificate” for the aircraft’s airworthiness and that the operator is the party responsible for ensuring the aircraft is in flying condition – with the crew particularly alert given that the jet had just come out of heavy maintenance.

“The aviation industry safety net is established in such way that the pilot-in-command is, by law, the ultimate [person] responsible for the safe operation of the aircraft,” says OGMA.

It states that the crew is effectively the “last safety barrier” for preventing an accident.

It accuses the inquiry of “different treatment and assessment” of OGMA’s operational checks compared with those of the crew, and that this is “unreasonable and clearly unfair”.

OGMA also questions whether sufficient analysis was paid to the crew’s handling of the severe flight-control problems, whether the aircraft’s flight manual should have addressed the issue, and whether the pilots followed any procedures correctly.

Several other matters from the inquiry are brought up in the critique, some of which are “detrimental” to OGMA’s reputation, the company insists.

Investigation authority GPIAAF says its task is not to assign blame or liability, in line with international standards, but it has included OGMA’s comments to “ensure transparency”, even though the inquiry had not sought opinions but rather comments on any factual errors.

GPIAAF has largely resisted responding to OGMA’s comments, with the exception of a few notes for “clarification” where it believes the company has made “non-supported or biased statements” which were “clearly out of scope” in regards to the consultation process for the draft inquiry report.