South African investigators have stated that Johannesburg airport ground control should have instructed pilots of a Mango Boeing 737-800 to deviate from a taxiway, rather than give them the option, before the aircraft struck a taxiing Comair jet.

But the inquiry into the incident, on 19 April last year, makes no reference to the decision by the Comair 737-800 pilots to proceed with a departure to Durban despite uncertainty from both crews over the possibility of contact.

The South African Civil Aviation Authority had already detailed the geometry of the event, which occurred as both aircraft were taxiing for departure.

Investigators state that the Mango 737 was following the Comair jet along taxiway A. When the Comair aircraft turned right onto link N, its tail remained protruding on taxiway A, leaving some 29m clearance. 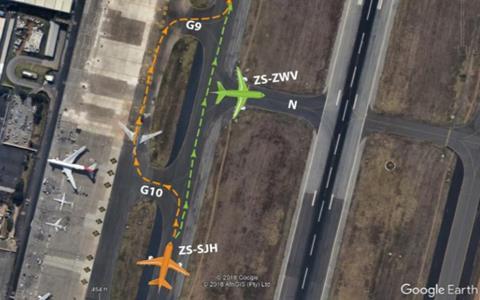 Boeing documentation on winglet-fitted 737-800s indicates the Mango aircraft would have needed at least 21m to pass without its left-hand main landing-gear leaving the shoulder of the taxiway.

While ground control gave the Mango crew an alternative route to pass safely – by steering onto a parallel taxiway – it said the crew could use this option “if required”.

The inquiry says the reason for this decision “is not clear”, adding: “The [controller] should have issued [the Mango crew] with an instruction and not give them an option.

“It is also likely that [the controller] knew or suspected that the [Mango 737] would not safely maneouvre behind [the Comair 737].”

After its crew opted against the deviation the Mango aircraft’s right winglet struck the Comair aircraft’s left-hand horizontal stabiliser.

Radio communications show that the Comair crew had felt the impact as “a bit of a bang” and asked tower controllers whether there had been a collision. This query was relayed to the Mango crew, who initially replied that they had not felt anything – leaving the Comair crew satisfied that they could depart safely.

But the Mango pilots, about 1min before the Comair flight was cleared for take-off, expressed doubt over their own conviction and decided to return to the parking area for a walk-round check, during which the winglet damage was discovered.

The inquiry has not made any specific reference to the potential risk arising from undetected damage to the Comair 737, whose crew was only informed of the Mango precaution during approach to Durban. Engineers subsequently found the horizontal stabiliser to be damaged along with a static wick on the elevator.

Investigators have attributed the collision to “poor airmanship” and “poor situational awareness” by the Mango crew. No-one was injured in the event.