Nigerian accident investigators have indicated that a landing incident involving a Max Air Boeing 747-400 at Minna resulted in a pod-strike of an outboard engine.

But the circumstances remain confused and the inquiry has yet to clarify the sequence of events. 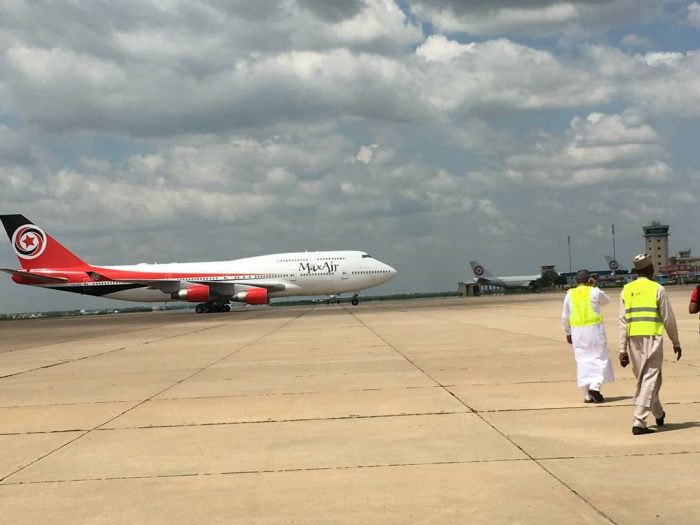 The aircraft (5N-DBK) had landed on Minna's runway 23 – which has a length of about 3,400m – following a service from Jeddah on 7 September.

It was transporting 560 passengers and 19 crew members, says the Nigerian Accident Investigation Bureau.

The bureau adds that the aircraft "scraped the runway" on landing and the outboard left-hand powerplant "brushed the runway surface".

It describes the incident as "serious" and has appealed for any video images or other evidence to assist its inquiry.

Max Air says that, at the time of arrival, around 04:45, weather conditions were poor with "torrential rain" and "unstable winds", and it claims the ILS at Minna was showing "unreliable signals" – a claim yet to be verified by investigators.

While local media appear to have exaggerated the incident, reporting that the aircraft "crash-landed" and veered off the runway, the airline has disputed the suggestions.

It indicates that there was a pod-strike arising from a "strong downdraft" and "complex landing manoeuvres", but insists the 747 "did not crash nor skid off the runway", adding that it taxied to the terminal where passengers disembarked "without any problems".

"All passengers and crew are safe and sound," it says.

Nigeria's National Hajj Commission, which regulates and supervises the transport of Hajj and Umrah pilgrims to Saudi Arabia, says there are "different versions" of the event involving flight VM2092.

It says the aircraft "landed in Minna safely", adding: "As for the condition of the [aircraft] the commission has been assured by the relevant agencies that investigation is ongoing to ascertain the nature of technical fault encountered."

Cirium fleets data shows the 747-400 is a 23-year old airframe powered by Pratt & Whitney PW4000 engines. It was delivered originally to Korean Air and picked up by Max Air in 2016. Cirium lists the aircraft as being in storage undergoing repair to minor damage.