Investigators have found that a Neos Boeing 737-800 continued to descend, unnoticed by the crew, during an aborted landing at Bristol, after a rushed approach meant the go-around altitude was not correctly set.

It dipped below 460ft as it travelled over runway 27, with its landing-gear retracted, before the pilots realised the situation and climbed away.

The aircraft – arriving from Verona on 1 June last year – had been vectored to a shortened arrival route by approach controllers, which left it above 10,000ft with less than 25nm (46km) to touchdown.

With the aircraft high and fast on the approach the crew was unable to switch the autopilot to vertical navigation mode.

The pilots instead reverted to ‘level change’ mode, which carries out an idle-thrust descent to the altitude selected on the mode-control panel – this was set to the approach minima of 1,000ft at the time.

As a result of the shortened approach, the aircraft’s descent was rushed and became unstable. It sank some 250ft below the designated flightpath, travelling with excessive airspeed, and the tower controller instructed the crew to execute a go-around. The UK Air Accidents Investigation Branch says the 737 was at 1,071ft – about 675ft above ground – and flying at 151kt (280km/h).

“The crew found themselves performing a go-around unexpectedly but did not know why they had been required to do so,” it adds. 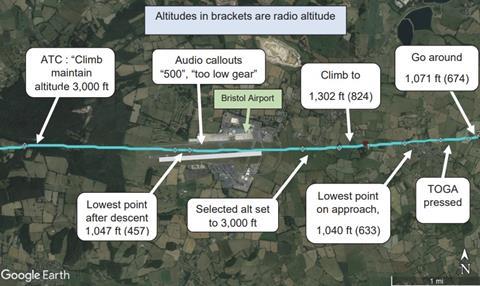 Key points during the Neos 737’s go-around at Bristol

Take-off thrust was engaged and the aircraft began to climb. But the altitude setting in the mode-control panel remained at 1,000ft because the crew had omitted to select the go-around altitude of 3,000ft.

Although the 737 initially climbed to just over 1,300ft, the flying pilot manually followed the flight director which attempted to guide the aircraft to level off at 1,000ft.

As the jet acquired this altitude, the autothrottle mode changed from ‘go-around’ to a mode which maintains the aircraft’s speed, resulting in the thrust levers being back-driven to a lower power setting and causing the landing-gear warning horn to sound.

The crew then adjusted the mode-control panel to set to the correct go-around altitude of 3,000ft.

But while this stopped the aircraft trying to level at 1,000ft it also caused a switch to vertical-speed mode. The vertical speed set in the mode-control panel at the time was a descent rate of 300ft/min, and the jet started to lose height as the pilot continued to follow the flight director.

“Neither crew member noticed for a significant period that the aircraft was descending during the manoeuvre,” says the inquiry.

It points out that the gear-warning horn was still active, owing to the low thrust and flap settings, and was followed by a ‘too low, gear’ warning from the ground-proximity warning system. The jet was descending for 32s, says the inquiry, reaching a minimum of 457ft above ground after passing almost the entire length of the runway.

“The crew then realised that the aircraft was not climbing as expected and adjusted the attitude of the aircraft to begin a climb,” it states, adding that the tower controller almost simultaneously issued an order to climb to 3,000ft.

After climbing away the aircraft (I-NEOT) subsequently levelled at 3,000ft and was vectored to another approach, following which it landed without further incident. None of the 173 occupants was injured. Weather conditions and visibility at the time were good.

Italian-based Neos has started using the incident in its training to highlight the risks of rushed and unstable approaches, says the inquiry, and is also using flight-data monitoring to identify similar approaches more readily.