Deterioration of these blades was one of several issues affecting various blade types in the engine, and Rolls-Royce has undertaken extensive work to study and correct the problems.

The first ANZ incident involved an in-flight engine shutdown – as well as damage to the airframe – resulting in the return to Auckland of a 787-9 service to Tokyo on 5 December 2017.

This was followed, just a day later, by an engine anomaly on a second 787-9, bound for Buenos Aires, which also returned to Auckland.

Both aircraft were fitted with the Package C version of the Trent 1000. Corrosion fatigue cracking was identified, which had led blades to fracture and separate from the intermediate-pressure turbine disc. 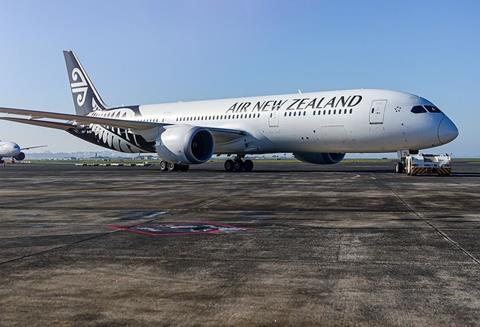 The New Zealand commission says Rolls-Royce’s addressing the safety issues identified in its interim report has “satisfied” the investigators.

He says prolonging the probe would not result in additional findings or recommendations.

“By the time we published our interim report, Rolls-Royce was already replacing affected [intermediate turbine] blades with a new design that used an established alloy with protective coating,” he adds.

“These actions by the engine manufacturer were sufficient to address the safety issues.”

Rolls-Royce stated in July this year that the newly-developed blade for the turbine, to overcome the sulphidation corrosion problem, had already been fitted across virtually all of the operational fleet, for all package versions of the Trent 1000.