Nigerian regulators have disclosed that they had to warn airlines against overwriting of cockpit-voice recorders, after being hampered during inquiries by absence of data.

The Nigerian Civil Aviation Authority sent an all-operators letter to carriers in July last year alerting them to the issue.

“[We have] noticed that airline operators’ flightcrew members are in the practice of continuously overwriting the [cockpit-voice recorder] information,” it stated, adding that this has “impeded” inquiries by making the task of retrieving data “impossible”.

The letter also warned that the authority would apply “enforcement processes” in the event of non-compliance with regulations on preserving recorder information.

Investigators disclosed the letter during an inquiry into a runway excursion at Lagos by an Air Contractors Boeing 737-500 (5N-BLG), after finding that the aircraft’s cockpit-voice recorder had been overwritten.

Analysis of the event has determined that excessive rudder application, after a crabbed approach, led to the excursion on 9 April 2016.

The crew of the aircraft, arriving from Port Harcourt, had already executed a go-around after encountering rain and a strong crosswind, up to 38kt, during an approach to runway 18L.

As the 737 returned for a second attempt to land, the crew requested the parallel runway 18R, and were informed of a 15kt crosswind from the left. The runway surface was wet.

Boeing documentation, according to the Nigerian Accident Investigation Bureau, states that the 737 has a maximum crosswind capability of 15kt on a wet runway.

Flight-data recorder information shows the aircraft was crabbing to the left during the ILS approach with a heading of 176.5°.

Its autopilot was disengaged at 83ft, just seconds before touchdown, and the inquiry says this gave the impression of an autoland approach “gone wrong”.

The first officer, who was flying, applied right rudder input prior to touchdown – probably to de-crab the aircraft – and continued this input afterwards, the rudder deflecting 25.8°.

Investigators state that this rudder application was “excessive”. As the aircraft touched down, to the right of the runway centreline, it veered towards the right, travelling 540m before encountering a grass verge.

The aircraft ran onto the grass and the captain took control to bring it back to the runway, taxiing to a halt at a parking bay. 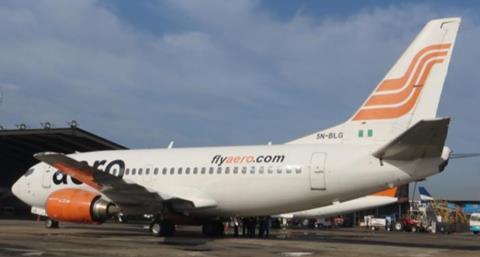 None of the 64 occupants was injured. But an inspection showed three main-gear tyres and a nose-gear tyre had sustained deep cuts and abrasions, while grass had collected in the wheel bay, axles, and flap tracks.

The inquiry says the crew did not report the incident to air traffic control, nor was it entered into the technical log.

Overwritten recorders have been an aspect of other Nigerian events including those involving an Air Peace 737-300 in May last year, plus a Med-View Airlines 737-500 and another Air Peace 737-300 two months later in July.