No evidence of nose-up pitch before An-26 cliff collision

Russian investigators have determined that an Antonov An-26 crew did not appear to attempt to pull up before the aircraft collided with a cliff face, but the turboprop did start to bank to the right 3s before impact.

The Interstate Aviation Committee inquiry has yet to explain why the Kamchatka Aviation Enterprise aircraft descended below the minimum cleared altitude while turning for a visual approach to runway 11 at Palana on 6 July.

About 5min before the accident – while the aircraft was on a heading of 25-30° and flying at 1,350m – the crew had been instructed to follow the 1A approach pattern and report reaching an altitude of 800m.

The approach involved turning left, heading west over the sea, before turning inbound to the east and descending to 600m in preparation for landing. 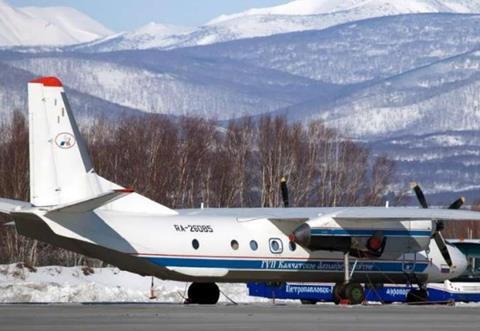 None of the occupants of the aircraft, RA-26085, survived the accident

After disengaging the autopilot the crew commenced the left turn. The aircraft’s speed began to decrease and the crew advanced the throttles.

The navigator informed air traffic control that the aircraft was descending to 600m as it progress on its heading of 340°.

Flight-data recorder information shows the crew again increased engine power before entering the left inbound turn at about 650m. This turn took about a minute and a half to complete, but as it rolled out onto a heading of 135-140° the altitude had decreased to 450-500m.

The navigator told air traffic control that the An-26 was 9km from the airport, the last communication received from the aircraft.

Again the crew advanced the throttles. The inquiry says the aircraft descended from 400-450m to around 230-250m.

Although the crew began a right bank, with roll up to 6°, about 3s before the aircraft struck the cliff face, investigators state there was no recorded activation of the ground-proximity warning system and “no significant control action” from the pilots in the pitch axis.

None of the 22 passengers and six crew members survived the crash.

Flight-data recordings revealed a difference between the torque indications of the left- and right-hand engines, which the inquiry is trying to understand – although it has not stated whether it bears any relevance to the accident.

Investigators have not had access to cockpit-voice recordings. While the quality of the flight-data recorder information was largely satisfactory, given the old technology, it was not of the standard of modern recording systems, the inquiry says.

There was a failure to record the throttle position of the right-hand engine, it adds, and a missing 10min section from part of the flight resulting from poor magnetic tape quality.