French investigators probing a serious turbulence event involving a Norwegian Boeing 737-800 have highlighted the disadvantages of air traffic controllers’ not having real-time weather data superimposed on their radar displays.

The aircraft, bound for Nice on 25 July last year, had been heading south, cruising at 37,000ft, with a flightplan intended to intercept waypoints in Italian airspace including ODINA, EVANO, ENOBA and BORDI.

But the crew informed Milan area control centre that they were carrying out avoidance manoeuvres, deviating to the west, in order to pass a line of storm activity over the Italian-Swiss Alps.

After circumnavigating by sight the cumulonimbus clouds that had been detected on the weather radar, the crew sought to rejoin the route to the BORDI waypoint and descend.

As the aircraft descended a new radar echo was picked up and the crew again decided to deviate around the weather before heading for BORDI.

According to the first officer, no red indications were seen on the weather radar. But immediately behind the cell they were passing, the crew saw a developing storm, with lightning, embedded in the cloud layers, which was too close to avoid. The crew turned on the ‘fasten seat-belt’ sign.

“This one will make a bang,” the captain remarked to the first officer. 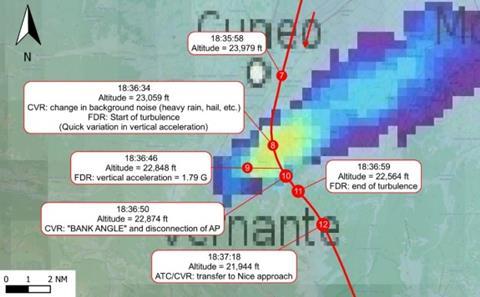 The aircraft was descending through 23,000ft in the vicinity of Cuneo when it passed through the storm. Its airspeed decreased to 228kt then increased to 272kt, and heavy precipitation was recorded on the windshield.

Passing through a zone of strong windshear and convective uplifts, the 737 experienced strong changes in vertical acceleration and a “violent” roll to a maximum of 35.5°, triggering a ‘bank angle’ warning, says French investigation authority BEA.

Although the turbulence event lasted less than 30s, two cabin crew members were injured – one of them seriously, suffering a fractured leg after his foot became trapped under an escape-slide housing.

BEA says the storm might have been hidden from the weather radar by the previous cell, or remained undetected despite being within the radar beam. It adds that the storm could still have been developing and only appeared shortly before the encounter.

But it points out that air traffic controllers were unable to obtain full awareness of the aircraft’s situation because they were not able to see meteorological information on their screens.

“They could not see the exact location of the storm zones that prevented the crew from heading to the requested waypoint for over 20min,” the inquiry adds.

This absence of weather information had been noted in previous investigations and studies into turbulence incidents, and BEA has reiterated a recommendation that suitable systems and techniques for displaying real-time weather data to controllers be explored.